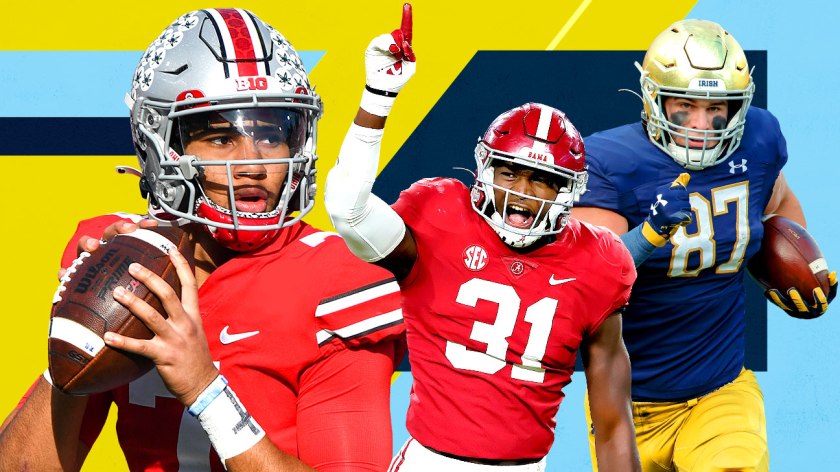 College football is right around the corner and what better way to start it off with some preseason rankings.

Coming into this season a lot has changed since we left off with Georgia holding up the National Championship trophy. Between transfers and coaching changes I don’t think we’ve ever had such a drastic change between seasons than this.

Let’s get into this year’s rankings.

Coming into 2022 I had the Georgia Bulldogs as my #1 ranked team and the season ended with them proving me right and winning their first National Championship in over 40 years.

The Buckeyes are this year’s Bulldogs. Coming off of a decent season for their program they are ready to come out with full force. Similar to Georgia in 2022, the Buckeyes open their season in a top 5 matchup vs Notre Dame. A win in that game really sets them up to run the table.

Ohio State will start this season with the best QB in the nation along side the #2 ranked WR & RB core, #3 ranked offensive line, and ranked within the top 20 for every defensive category. This team is set up for a great season and in a good position to take home the National Championship.

Alabama rolls into this season coming off a National Championship loss and returns a ton of talent. Between Bryce Young under center and Will Anderson Jr. running the defense this team is going to be very hard to beat.

The Tide ranks within the top 15 in every single positional category on both sides of the ball, including the QBs, RBs and LBs all ranking in the top 3 of their respective categories.

Alabama looks like the top dog in the SEC as of now and will probably stay that way all year long.

The Bulldogs were a great team in 2021 but I see a huge step back coming from them in this upcoming season. A huge step back for a National Championship team lands you in the #3 spot that a lot of programs would kill to be in so they will still be a great team this season.

I don’t really have much faith in Stenson Bennett to lead a team the entire season long with some pretty high expectations. I think their defense takes a big step back as well with the losses of some key players.

The Dawgs will be very competitive and probably make the SEC Championship and a NY6 bowl but a repeat is not in their cards.

Notre Dame ranks in the top 10 in all defensive categories. They are going to have the toughest defense in the nation this season.

However, their offense is lacking a lot, especially in skill positions. If the Irish can put together a well oiled machine on the offensive side of the ball you will be seeing this team in the playoffs and in serious competition for the National Championship.

Coming off their best season under Harbaugh we have the Wolverines sitting in the #5 spot. Just like Georgia this team lost a lot on the defensive side of the ball.

With defense being their strong suit last year, losing what they did is going to hurt them coming into this year. They will still be a great competitive team but unfortunately will not compete for the B1G Ten Championship or playoffs this year.

I am not a fan of Clemson coming into this season and the only reason they’re ranked this high is because if they played A&M week one I’d say the Tigers would win.

The Tigers have fallen off a lot in the last few seasons and everyone is just waiting around for them to be good again because of their name but that is not happening anytime soon.

Their defense has regressed the last few years and with the loss of Venables will regress even more. They have poor QB play with DJ Uiagalelei under center and I’d be very surprised to see him keep the starting job all season long.

In a weak ACC the Tigers will have a good record but when it comes to playing the big boys they’re going to get embarrassed all season long.

The Aggies have a lot of talent that if put together correctly can make for a great season in College Station.

With a great coach in Jimbo Fisher and a lot of new highly ranked recruits coming in there is a lot of potential for this team.

They beat Alabama last year and showed signs of a great team and can really make that huge next step this year.

Utah is a great team in a bad conference. The Utes will be in the running for the PAC-12 this year but I don’t think they have enough to compete with a good SEC or B1G Ten team.

The Utes showed great signs in last year’s Rose Bowl vs Ohio State and will have great QB play but have a lot of other missing pieces.

They will compete for their conference championship but I don’t see a playoff berth in their future.

The Sooners lost maybe more than any team in the entire country after last year. Losing their head coach and star QB is not easy to bounce back from.

The Sooners do look like they are still the favorite to win the Big 12 but they have a ways to go to get back to that top 5 area where they have been for the last few years.

Last but certainly not least is the most interesting team in the country. The Trojans gain head coach Lincoln Riley and star QB, Caleb Williams from Oklahoma.

The recipe of these two in a weak conference is going to be very fun to watch. I’d expect a lot of points from the Trojans throughout this season.

I can see USC making a run for the playoff toward the end of the season but I think this is going to be a very experimental season for the Trojans.