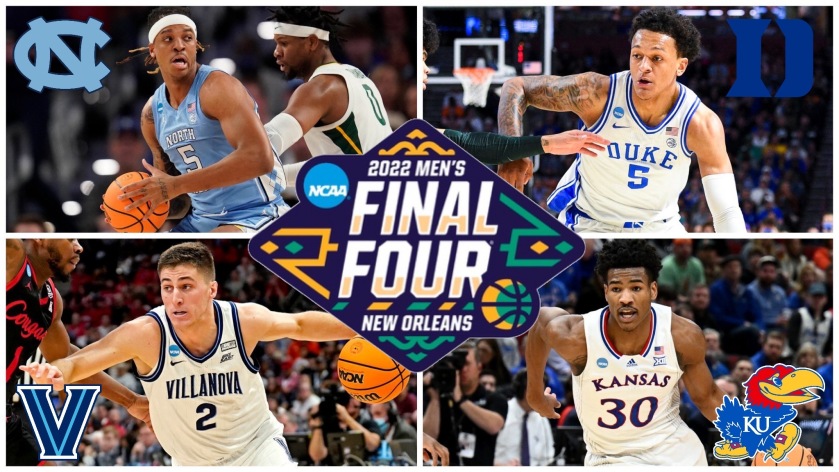 After two weeks of upsets and surprises we are now left with four teams in this year’s tournament. Four historic programs with rich history are set to square off this Saturday in New Orleans. Duke, North Carolina, Villanova and Kansas, four true blue blood programs have fought their way through the last two weeks and find themselves two wins away from claiming the 2022 National Championship.

We start off with the first of the two games scheduled for Saturday night. Both of these teams have been playing on a much higher level than their opponents have thus far into the tournament.

Villanova had a real test in the Elite Eight against Houston, who was the hottest team in the country up to that point. Kansas has made light work of most of their opponents so far winning their Sweet 16 and Elite Eight games by a combined 31 points.

Both teams are insanely well coached but Villanova just doesn’t make those silly mistakes some teams are prone to make. They make their free throws, leading the country with an 83% free throw percentage as a team and do not foul a whole lot, with only 15 fouls per game.

Kansas is a great team but Villanova will win this game and move onto the National Championship.

Now moving onto the main event of the night. Duke vs UNC, one of the most historic rivalries in all of sports facing off on the biggest stage in college basketball in what could be Coach K’s last game.

For two teams who have combined for 200 tournament wins this will be the first time these programs ever face each other in the tournament.

The Tarheels seem to have everything going for them in their last few games. Stars Brady Manek and Armando Bacot have been playing lights out this tournament.

As for Duke they have a few superstars of their own in Paolo Banchero and Wendell Moore. For as good as a coach, coach K is the talent in this game is going to be the focal point of this matchup.

Duke has been a bit more battle tested in this tournament so far compared to UNC. The Tarheels have won their last two games against a 15 and an 11 seed by a combined 27,

While Duke has played a 3 and a 4 seed in their last two games playing them much closer.

I think Coach K and Duke will fight off the Tar Heels and advance to the National Championship.

The National Championship is scheduled for Monday night at 9:20 PM.