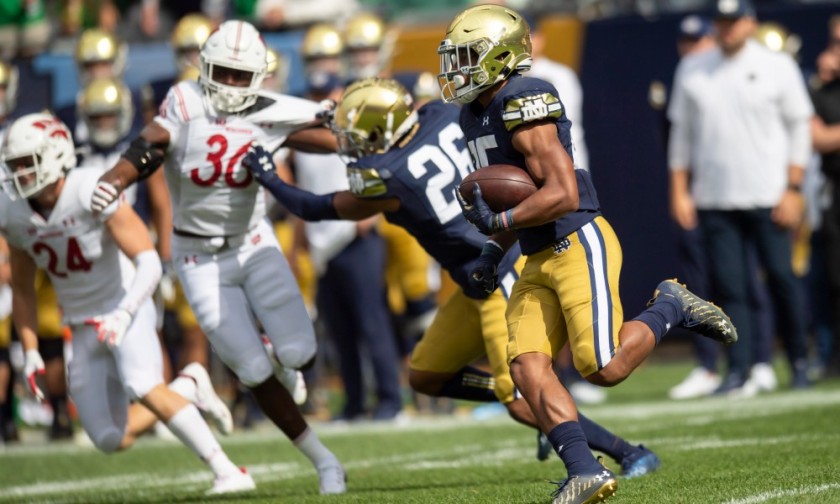 We’re just about a month into the season and to say things have been crazy would be an understatement. We’ve seen multiple ranked teams get upset consistently every weekend so far along with the surprise teams like Iowa and Oregon already being ranked in the top 5. Just this weekend we saw Clemson lose their second game of the year and Oklahoma play West Virginia down to the wire. There were not many huge games this weekend so these rankings will look pretty similar to last week’s with a few changes.

Georgia continues to show why they are the best team in college football by shutting out Vandy 62-0. This game could have been 100-0 if they really wanted.

The Tide played a cupcake opponent this weekend and took care of business like they needed to do leaving them at #2 for another week.

Penn State hops Oklahoma to get to this #3 spot after a win over Villanova but more so because of Okloma’s poor performance this weekend. Next week vs Indiana will be another big test for this Nittany Lion team

The Ducks headed into the 4th quarter vs Arizona with a 19-24 score looking like they could be knocked off but they prevailed and scored 17 unanswered to remain undefeated. Looking at this team’s schedule it’s hard to see anyone giving them a loss.

Iowa looked pretty good again this weekend taking on Colorado State and winning 24-14. This team doesn’t have the firepower to put up huge offensive numbers but the Hawkeyes still took care of business.

Week after week I try to keep defending this Sooner team but they cannot seem to put it together. I still think they play down to their opponents level and have the ability to play at the top level but they just haven’t shown it yet.

Cincinnati is coming off of a bye and will face Notre Dame next weekend in what will not only be the biggest game of Cincinnati’s season but their biggest game in program history.

The Razorbacks make their first appearance on this year’s top 10 and they do it with style. Coming off a huge win over Texas A&M this team is peaking at the right time, they have a gauntlet of games coming up and if they can win a few of those this team could possibly creep into the top 5.

Florida beat Tennessee by the score of 38-14 and looked pretty good while doing so, leaving them at this #9 spot.

Notre Dame gets a nice ranked win under their belt vs Wisconsin right in time for their matchup vs Cincinnati next weekend. When QB1, Jack Coan, went down this team didn’t really skip a beat and I think that is what can separate good teams from great teams.