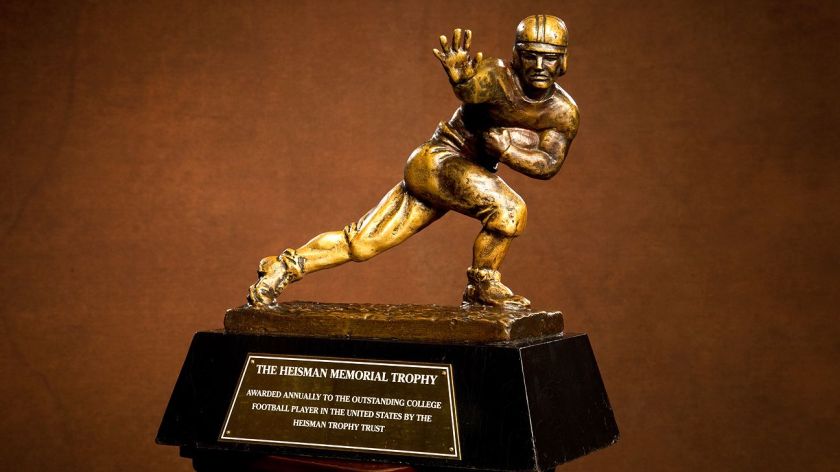 After a 2020 season like no other we’re just a few weeks away from returning to a normal college football season that we’ve all greatly missed. Last year we saw the historic season of Devonta Smith finishing off his career with a second National Championship and a Heisman Trophy. Smith shocked the entire college football world last year by putting up video game numbers against top teams in the country and being the first non-QB to win this award since Derrick Henry in 2015. This season with all the talent under center I think the Heisman is bound to be handed back to a quarterback but there are still some other skill players who can make a serious case for the award this year.

Starting off with this year’s favorite to win the award, and rightfully so, we have Spencer Rattler. Coming into his third year at Oklahoma and ending last year with over 3,000 passing yards and 28 touchdowns Rattler is due for a breakout season under Lincoln Riley’s system this year. In a weaker than usual Big 12 besides Iowa State I don’t see any defenses giving this team any troubles on the offensive side of the ball so much like Oklahoma QB’s of the past Rattler is going to do whatever he pleases on the field and will be a Heisman finalist this season.

D.J. is widely regarded as one of the top 3 favorites for this award but in my opinion I can’t see a world where he takes it home. If Trevor Lawerence couldn’t win the Heisman during his time at Clemson I don’t see how D.J. can. Sure he’ll be a great quarterback for the Tigers and make some big plays every so often but I don’t think he has what it takes to win a trophy like this in any way.

I believe Howell is as close as anyone in the entire country to the level of Rattler but playing at a school like North Carolina is something that shouldn’t hurt his chances to win the Heisman but it will. The Tar Heels are unlikely to make a push for a playoff spot with a pretty weak ACC schedule so Howell will have to put up far and away better numbers than everyone else for a real shot to win this award. With that being said I think he has the potential to do it but it’ll be a harder path than if he played at Ohio State or Alabama.

King is coming off a pretty serious knee injury so who knows just how good he’ll be able to move this season. As a player who can really hurt a defense with the dual-threat of his legs, a knee injury was a real killer to his potential but if he can come back at 100% I think King will give defenses a real run for their money throughout this season. Starting the year off vs Alabama will be a huge help for his Heisman campaign if he can make a big name for himself in that game and keep things rolling during the year. I can see King getting an invitation to New York in early December.

When talking about the top players in the country the list usually starts with Howell and Rattler but not many people realize just the amount of talent Slovis has. Playing on a pretty weak USC team in an even weaker PAC-12 does hurt his recognition but it shouldn’t take away from his potential. Slovis will have a great season this year with the Trojans and hopefully a few big number games can boost him into some Heisman conversations later in the season.

Here we have our first non-QB on the list, after leading the country in rushing yards last year and averaging 131 yards per game Hall comes in with the best odds for a RB to win the Heisman. I think it would be pretty unlikely to see back to back winners of this award not be quarterbacks but if it were to happen I think Hall has the best shot. In a great system under Matt Campbell at Iowa State I think Hall will have an amazing year.

Robinson comes in as the next RB on this list and I think he’s in a great spot to have a breakout season. With new head coach Steve Sarkisian who as Alabama’s OC last year finished the season with a National Championship, two players as Heisman Finalists and one player as the Heisman winner, this will be a perfect system for Robinson to flourish in. With an unproven QB this offense is going to rely on Robinson a ton so if he can step up when it matters he will have a great year.

Last but certainly not least we have one of my favorite players in the entire country. Kayvon Thibodeaux will be without a doubt the most dominant player on the defensive side of the ball this year and maybe the most dominant since Chase Young. Only once has a defensive player ever won the Heisman but I think he has the potential to make it two depending on how other player’s seasons go. Thibodeaux will be a joy to watch lineup every Saturday this fall so definitely keep an eye out for him this season.

With all that being said my official predictions for the 2021-22 Heisman Finalists and winner are: