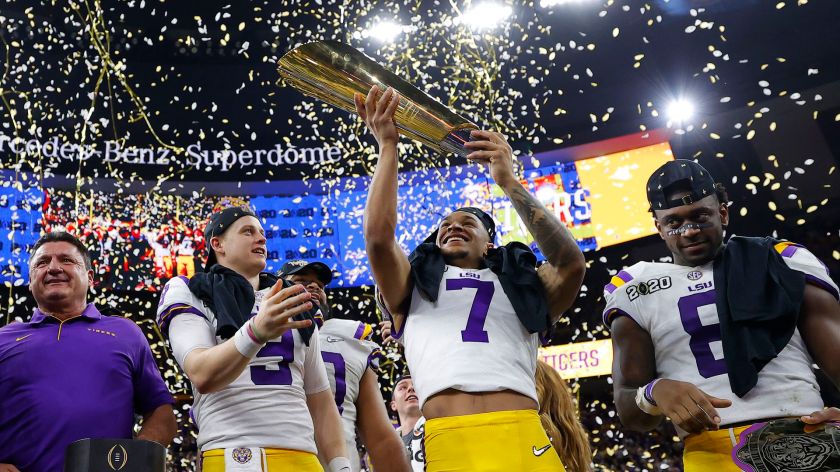 A good amount of time has passed since the 2020 National Championship game and there’s still a good amount of time to pass until the 2020-21 season begins especially in the world we’re living in now it could be even longer than we expect. In an effort to lighten the mood around the world of college football i’m here to take a look back at last year where we witnessed the greatest college football team ever.

Whenever the conversation of the greatest college football team comes up there are some obvious teams to bring up to look at and compare so we’ll do just that. Some household teams are ‘05 Texas Longhorns, ‘01 Miami Hurricanes, ‘95 Nebraska Cornhuskers, and more recently ‘19 Clemson Tigers and ‘20 LSU Tigers. Let’s start with the oldest to the youngest teams on this list so first up we have the 1995 Cornhuskers.

Now this was when Nebraska was still in the Big 8 not the B1G TEN at the time which is now the Big 12, confusing I know but just stay with me. This team played way before my time but it would be an incredible disservice to leave them out of this conversation. In 1995 the Cornhuskers averaged 53.2 points per game and their opponents averaged only 14.5 per game. While being consistently ranked No. 1 and No. 2 all year long, only trailing once all year and beating 4 ranked teams it may look hard for anyone to top this teams

overall performance but the reality is the game has changed so much since 1995. And its changed for the better, this team would have no idea how to cover all of ‘20 LSU’s ‘05 Texas’ or ‘19 Clemson’s weapons. Another thing that hurts their resume is they played in the BCS era with no extra playoff game, the 1995 Nebraska Cornhuskers are one of the greatest teams ever but not THE greatest.

Now just like the ‘95 Nebraska team the ‘01 Hurricanes were in the Big East at the time which is now only a basketball conference and now Miami plays in the ACC. This team is mostly known for what their players went on to do in the NFL but the team still had a stellar season in 2001. Just to put into perspective how much talent this team had, Frank Gore, 3rd on the NFL all time rushing leader list was a backup on this team. So as you can pretty much tell just from the cast of characters this team had they were very dominant averaging 42.6 points a game and only letting up 9.75 points a game. They beat 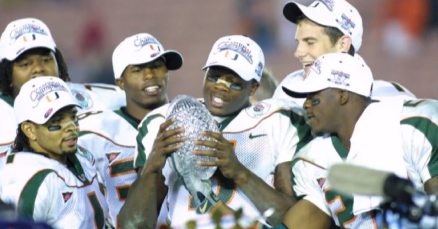 5 ranked teams during this season and were consensus National Champions after
beating Nebraska in the Rose Bowl. Nothing much else to say about this team besides they are clearly one of the greatest college football teams ever assembled.

This team is the first somewhat of an underdog we have on this list as they were consistently ranked No. 2 under USC throughout the whole year. This team doesn’t have all the eye popping stats and players like other great teams but rather the team with all of the eye popping stats and players was the team they beat in the National Championship. The 2005 season was a season ran by Reggie Bush and Matt Lienart up in Southern California, The glory days of USC. The 2005 National Championship between No. 1 USC and No. 2 Texas  was a highly anticipated one after the Heisman trophy went to star RB from USC Reggie Bush over star QB Vince Young from Texas with the QB of USC, Matt Lienart coming in 3rd. So this game was focused around the 3 Heisman

Finalists and the underdog story of the Texas Longhorns vs at the time what people were saying was the best team ever in the ‘05 USC Trojans. That was until quite possibly the
greatest walk off touchdown of all time by Vince Young to secure the National Championship and cement his and the ‘05 Texas Longhorns in history.                Vince Young Touchdown

Playing in a weak ACC conference it was tough for Clemson to come across some top competition but at the end of the season they took care of business with the Nations top teams. This team actually started with Kelly Bryant at QB but quickly made the smart choice to start true freshman and projected #1 pick in the 2021 draft Trevor Lawrence who would later lead them to Clemson’s second National Championship in 3 years. This team is a combination of the ‘01 Hurricanes and the ‘05 Longhorns in different ways. Like the Longhorns this Clemson team was the underdog coming into this game facing off against big bad Tua, Nick Saban and Alabama and similar to the ‘01 Hurricanes in the 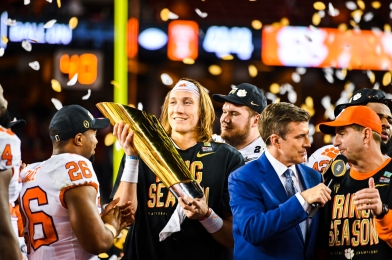 facts that they have NFL talent up the wazoo on this team anywhere you look chances are they were or will be a first round draft pick and if your looking at T-Law’s luscious locks your looking at the next great QB so to say the least this Clemson team was talented. And to top it all off they went into the 2019 National Championship with a freshman QB and put a 44-16 beating on Alabama for the cherry on top.

Oh boy, the team we’ve all been waiting for, The 2019-20 LSU Tigers. After reading the other teams bios you may be thinking how any team can clearly top that but here we are. Let’s start off with just the story of this team, coming into the year ranked at No. 6  but were still written off by many as they were not expected to get over the hump of Alabama and Georgia. Their transfer QB from a 3rd string spot at Ohio State finished his Junior year at LSU with 2,894 yards and 16 touchdowns and their Coach was on a make or break season for his career at LSU. And Coach O and Joe Burrow went into this past season and to put it short, fucked shit up. They beat 7 not only ranked teams but teams ranked in the top 10 that has never even been close to done before, Won the SEC and landed the #1 seed in the playoffs. Joe Burrow broke every meaningful record a QB can 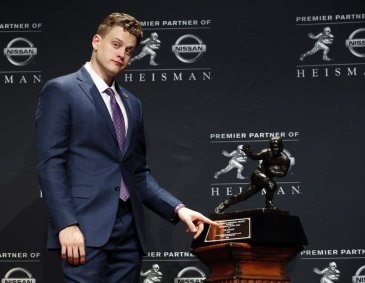 have, finished the year with 5,671 yards and 60 touchdowns, and to top off his individual career took home the Maxwell (Player of the Year), O’Brien (Best QB) and Heisman with the biggest margin of victory ever. As for their other players they did quite fine by taking
home the Biletnikoff Award (Best WR), Jim Thorpe Award (Best DB), and the entire LSU offensive line won the offensive line of the year award. The LSU Tigers headed into the playoffs with all these awards under their belts and kicked Oklahoma’s ass in the Peach Bowl winning 63-28 and then headed to play the National Championship IN NEW ORLEANS! Just when you thought the story of this team couldn’t get any better they play the National Championship in their home state. Remember that 2019 Clemson team from a few minutes ago? That’s who the LSU Tigers would face off against in the National Championship minus a few players from the year before but not many. And just like they did all season LSU changed the landscape of college football winning 42-25 and completing the greatest story book ending one could ever think of. This team single handedly  changed the world of college football with an air raid offense, transfer QB, “too loud” of a head coach and they proved everyone wrong on their way to greatness. There will never be a season comparable to Joe Burrow, to Joe Brady’s offensive scheme, 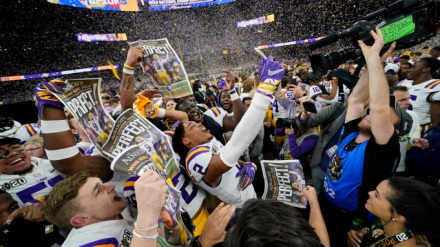 to Ja’Marr Chase & Justin Jefferson, to Derrick Stingley, Grant Delpit & Kristian Fulton, let alone ALL on the SAME team. It will forever be imitated and never duplicated, the title of “The Greatest College Football Team of All Time” belongs now and forever to the Joe Burrow and Coach O led LSU Tigers of 2019-20