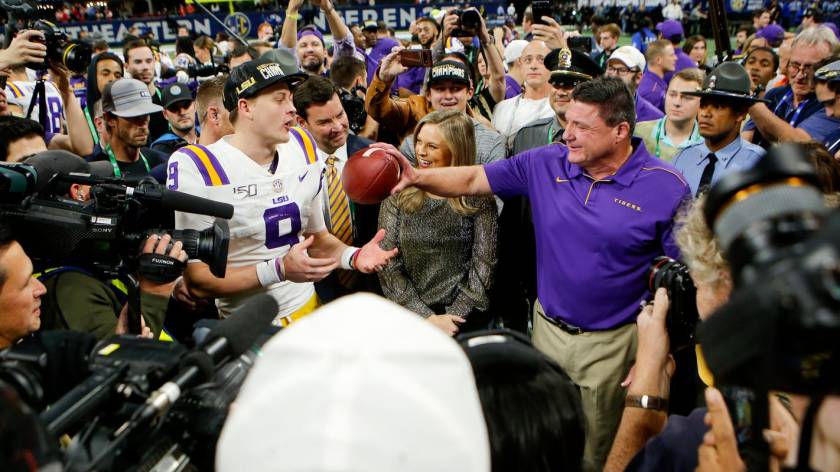 Make sure to read My Updated CFB Top 10 Week 14 before reading this. Unfortunately the college football season is coming to an end but we still do have bowl games to look forward to. This weekend could have been a lot crazier than it already was but it looks like the playoff picture is pretty much set at this point. So with that being said, let’s take a look at how I think the playoff picture will and should look like after this weekend.

LSU was ranked #2 by the committee coming into this week and I thought it would take a lot from both LSU and Ohio State to move LSU back up to #1 and that did just happen. Ohio State played a closer game than LSU while their still both very dominant I think LSU gets the #1 seed.

The Buckeyes came out of this game very weak but obviously came back and won the game. With this performance I think Ohio State will now move down to #2 and most likely play Clemson.

The Tigers haven’t really played anyone to prove just how good they are but I think everyone knows the potential of this team. Whoever gets the 2 seed is definitely not going to want to see Clemson in a few weeks from now.

And the final team that makes the playoffs is the Sooners. Unfortunately I don’t believe Oklahoma is part of the 4 best teams but I do understand that they are conference champions with only 1 loss but I still do believe Oregon, Georgia and Wisconsin are all better than OU but OU will almost certainly get in the playoffs.

Due to just one bad game in Tempe, Arizona the Oregon Ducks are missing out on the playoffs. If that game never happened the Ducks would be getting this years 4th spot and would be giving whoever they played more of a game than Oklahoma is going to.

Honestly, good thing that the Sooners won this game vs the Bears because I definitely did not want to see the Baylor Bears get blown out in the playoffs at least Oklahoma might bust a few big plays. Baylor’s program looks to be on the rise but this year they couldn’t get it done.

The Bulldogs are a better team than Oklahoma but unfortunately with 2 losses there is just no way they could have made the playoffs. The SEC Championship was must win for this team and they didn’t pull through.

This team showed some spurts of being very good and almost shaking the whole landscape of college football last night but the Buckeyes were just on a different level than Wisconsin. The loss to Illinois really came back to bite them because maybe that B1G TEN championship game ends differently if the Badgers know they have a shot at the playoffs but they still did lose.

Like I said in the beginning of the season, Utah will not make the playoffs. This team was very overrated and outmatched by a very good Oregon team. The Utes aren’t terrible but definitely not playoff worthy.

The Nittany Lions did not have a game this weekend but still look to get into a NY6 bowl game.