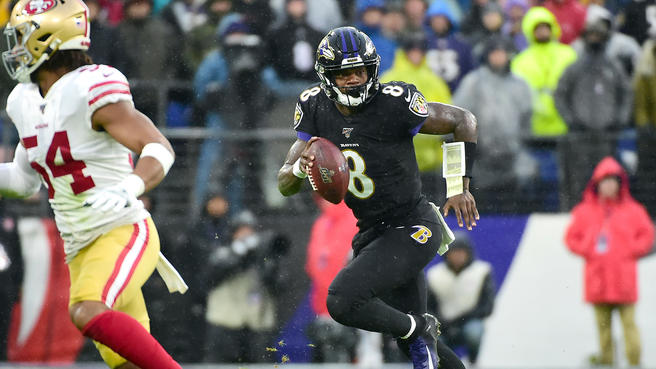 This is the time of year where the NFL season starts to become very interesting. There are many teams looking to make a push for the playoffs while some are looking to stay afloat. In a year where the winner of the NFC East is most likely going to be 8-8 and where a top team like the Seahawks, Vikings, 49ers or Packers are going to be hosted by the Cowboys or Eagles it’s important to see how the top teams stack up against each other no matter what seed they are in the playoffs. With that being said, let’s see how I think the top 10 teams matchup against each other.

As of now the Ravens are the #1 seed in the AFC with a huge lead over their division and a head to head win over New England. Coming off a huge win over the 49ers it is very hard to say that this Ravens team isn’t the best in the league.

Russell Wilson and the Seahawks are going to be a very tough team to play for the rest of this year and especially in the playoffs. The Seahawks have arguably the hardest stadium to play in so if they can secure home-field advantage I can’t see many teams beating this team in Seattle.

The 49ers have shown some weaknesses in recent weeks by suffering losses to the Seahawks and Ravens, but I still believe this is a very good team. By the time the playoffs roll around I have no doubt the 9ers will make the proper adjustments and possibly avenge these losses.

The Saints have been a very under the radar team to this point of the year as they only have 2 losses and haven’t really played any big teams, until this week. This week’s game between the Saints and 49ers is sure to be a good one and is going to have a huge impact on the NFC playoff picture and possibly for the 1 seed.

Kansas City has also been having a very under the radar year due to the injury of Pat Mahomes being out for a few weeks and the offense not being as powerful as it was last year but they’re still a top team. Much like Seattle, the Chiefs would be a very hard team to beat with home field advantage but with 4 losses that’s going to be very tough to do.

Aaron Rodgers and the Packers are back to what they once were after missing the playoffs last year. Green Bay is another tough place to play on the road, especially in the playoffs but it would be a tough road for them to get home field advantage.

Unfortunately last night the Vikings took a very tough loss to the Seahawks moving them currently to the 6 seed in the NFC while the Cowboys sit at the 4 seed at 6-6. Kirk Cousins is still yet to get a win on Monday night but this loss was no where near his fault as his only interception came off a dropped pass.

The Texans finally get their big signature win they’ve been searching for years. A win like this is a huge confidence booster for the team moving towards the playoffs especially when it was over the Patriots.