Make sure to read Heisman Watch: Week 12 before reading this. This was yet another boring week in terms of the Heisman race because at this point I think this award has already been won but there is still a possibility that I’m wrong. With that being said let’s get into how the Heisman potential players performed this weekend. 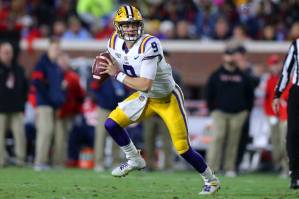 Like i’ve said multiple times before, I believe Joe Burrow has already won this award and there is not much he can do to not win this award. In LSU’s 56-20 W over Arkansas Burrow recorded 327 passing yards and 3 touchdowns.

Fields had a pretty solid game while leading his team to a 28-17 win over #8 Penn State and pretty much solidifying a spot in the playoffs. In the win Fields had 188 passing yards and 2 touchdowns.

Hurts and the Sooners sneak out of yet another close win this weekend. In the 28-24 win over TCU Hurts finished with 145 passing yards and 2 touchdowns.