Make sure to read Heisman Watch: Week 10 before reading this. This weekend was a huge time for the top players to show just how good they are and who really deserves the Heisman, and they all did just that. All the players that I believe still have a shot at the trophy showed up this weekend. So with that being said, let’s get into how each individual player performed this weekend.

I mean I don’t even know what to say about this kid at this point, he has proven again and again that he is the man and the best QB in the nation. In arguably what could be referred to as the game of the century with all of americas eyes on him vs the #3 team in the nation this kid did nothing but perform. Cool, calm and collected all day long while leading the LSU Tigers to a 46-41 win and most likely bringing them to the #1 spot. In this win Burrow had 393 passing yards and 3 touchdowns and also adding on 64 yards on the ground.

In a showdown between the 2 best QBs in the nation unfortunately Tua did not come out on top. He kept his team close while still injured but just couldn’t pull off a win. He still had a great game with over 400 passing yards 4 touchdowns and 2 turnovers.

Hurts and the Sooners just barely squeak out of a loss to an unranked team at home. In the 42-41 win Hurts recorded 273 yards and 3 touchdowns in the air and 68 yards and 2 touchdowns on the ground. 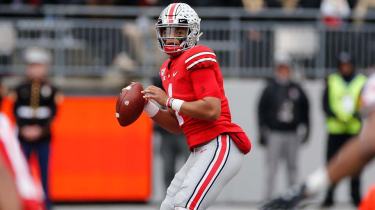 A Fields led Buckeyes team put a huge beating on Maryland this weekend. In the 73-14 win Fields put up 200 passing yards and 4 total touchdowns.