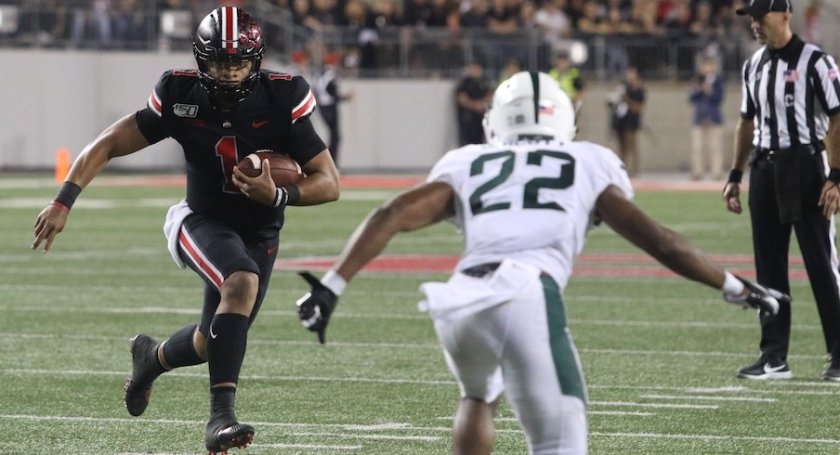 Make sure to read Heisman Watch: Week 5 before reading this. This week was yet again nothing really special from any top players with most players on a bye but the ones playing still didn’t do much. Teams like Clemson and Alabama were on byes so you won’t see anything about any players on those teams even though I think any Clemson player’s Heisman dreams have no shot of coming true. So with that being said, let’s see how these top players performed this week.

Fields led his team to a huge conference win vs a ranked opponent this week. In this 34-10 win over Michigan State Fields recorded 206 passing yards, 3 total touchdowns and 1 interception. This was kind of an underwhelming stat line for fields since we know he can double these numbers but in a game like this on this stat line is still very impressive.

It really is crazy to see a QB from LSU play like this kid is playing. LSU is definitely not known for their QB play but maybe Burrow can turn that around completely for this program. Burrow led the Tigers to yet another huge win this weekend while also recording 6 total touchdowns, 344 passing yards and 1 interception. Burrow is really cementing his name in this years Heisman race.

My take on Hurts at the beginning of the year is really looking like it’s going to come back and bite me but I am still not ready to say I was wrong about him. If he can do what he’s been doing against Texas next week I’ll finally admit I was wrong about him but until then I shall not. This week Hurts led the Sooners to a 45-20 win over Kansas while putting up 228 passing yards, 4 total touchdowns and 1 interception.

Hubbard is a new name on this list and deserving of a spot. He leads the nation in rushing yards this season with 1,094 rushing yards in 6 weeks of play. This week in the Cowboys loss to Texas Tech Hubbard recorded 156 rushing yards and 3 touchdowns.

Now to a very familiar name on this list, Johnathan Taylor. In Wisconsin’s 48-0 blowout win over Kent State Taylor put up 186 rushing yards and 5 total touchdowns. 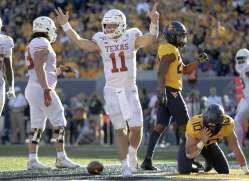 Ehlinger led the Longhorns to a shootout win in Morgantown on Saturday. In the 42-31 win Ehlinger recorded 211 passing yards and 4 total touchdowns, 2 passing and 2 rushing. This was a great game for Ehlinger to keep his Heisman hopes alive this year.