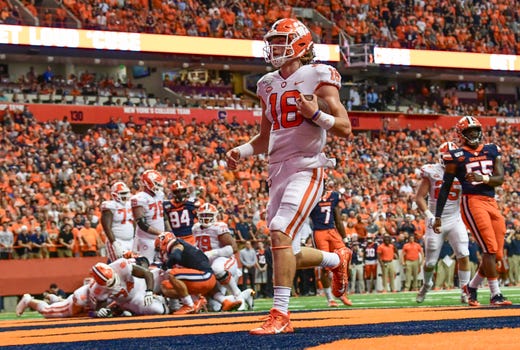 Make sure to read  My Updated CFB Top 10 Week 2 before reading this. This week was a pretty underwhelming one as it was the first weekend of college football with no ranked vs ranked matchups since October 14, 2017 although there still was some surprises this week but nothing that affected the top 10 so this list will be pretty similar to last week as we get ready for next week which looks to have around 4 major matchups to look forward to. So with that being said, let’s get into how my top 10 looks after week 3.

Next week: vs Charlotte

Another week that the Tigers hold the #1 spot and rightfully so. This was Clemson’s first road test of the year and they took care of it pretty soundly. By the end of the year Syracuse will most likely be one of Clemson’s top opponents on their schedule so this win shows just how good the Tigers really are.

Next week: vs Southern Mississippi

The Crimson Tide took care of what looked like a pretty good South Carolina team on Saturday. South Carolina got screwed over by little mistakes but their team and officials throughout this game but this game was really closer than what the score shows.

Next week: vs #7 Notre Dame

Georgia took care of a much inferior opponent this week and look to take care of Notre Dame next week. This game has been circled on both teams calendars for over 2 years now as Georgia looks to complete the sweep over ND and make a serious case for the playoffs.

Coach O and the Tigers take care of business this week and look to do the same next week vs Vanderbilt.

Next week: vs Miami (OH)

The Buckeyes looked very good vs their first B1G TEN opponent in Indiana and look to keep that rolling throughout this season.

Next week: vs Oklahoma State

The Longhorns put a beating on Rice this week and look to do the same thing to Oklahoma State next week. A win over Oklahoma state would be a great way for Texas to start theirBig 12 run this year.

I’m still not sold on the Sooners just yet I really want to see them beat a ranked opponent before I can say this is a playoff contending team. The Sooners won’t play a team ranked as of now until they face Texas on October 12.

Michigan was on a bye this week and takes on Wisconsin in Madison next weekend.

After starting the year off with a big win over Oregon Auburn has been rolling this year. They have another huge game next week @ Texas A&M and if Auburn can get a win in that it would really help their case for the playoffs.

The Ducks get another win this week and look to head to Stanford to get another one. Stanford is a historically good team but not so much this year so what could have been a top 25 matchup is no longer one.