Make sure to read Heisman Watch: Week 2 before reading this. As this has been the first week in 2 years to have no ranked vs ranked matchups there wasn’t really any competition for these top players to play against but not everyone played to their full potential despite who their opponent was. Let’s get into how the Heisman hopefuls did this weekend.

Fields and the Buckeyes took advantage of their lesser opponent this weekend putting a beating on Indiana by the score of 51-10. Fields put up 199 passing yards and 3 passing touchdowns on 14/24 passing attempts while also recording 1 rushing touchdown in the big win. 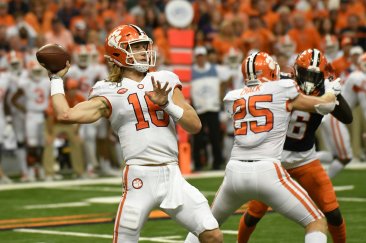 Lawrence led Clemson to yet another big win this week vs Syracuse but still didn’t have a perfect game. In the 41-6 win over the Orange Lawrence recorded 395 passing yards, 3 touchdowns and 2 interceptions on 22/39 passing attempts. Lawrence is going to need to really cut down on the interceptions unless he’ll never win this award.

Yet another disappointing game for Etienne this week. After his big game week 1 vs Georgia Tech Etienne hasn’t really done much this season. In the win over Syracuse he only rushed for 76 yards on 14 attempts.

Tua had another huge game this weekend leading Bama to a 47-23 win over their first SEC opponent, South Carolina. Tua put up 444 passing yards and 5 touchdowns on 28/36 passing attempts. If Tua can keep playing like this the Heisman will be his in no time.

Taylor and the Badgers were on a Bye this week and take on #10 Michigan next week.

Moore had a really quiet game this weekend vs TCU and that is not good for his Heisman campaign as he needs all the big games he can get. In the 34-13 loss Moore recorded 3 receptions for 25 yards

Burrow has really been making a name for himself the past 2 weeks as he had another huge game this weekend in the 65-14 win over Northwestern State. Burrow put up 373 passing yards, 2 passing touchdowns and 1 interception while also racking up 30 rushing yards and 1 rushing touchdown. 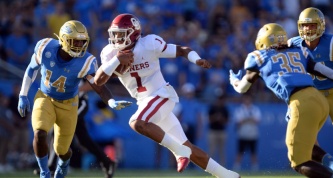 Yet another huge game for Hurts vs yet another very bad opponent. 289 passing yards, 3 passing touchdowns, 150 rushing yards and 1 rushing touchdown is nothing to look over but i’m still waiting to see what he can do vs a ranked opponent.

Ehlinger lead the Longhorns to a bounceback win this week after losing to LSU last week. In the 48-13 win over Rice Ehlinger recorded 279 passing yards and 3 touchdowns on 23/27 passing attempts.