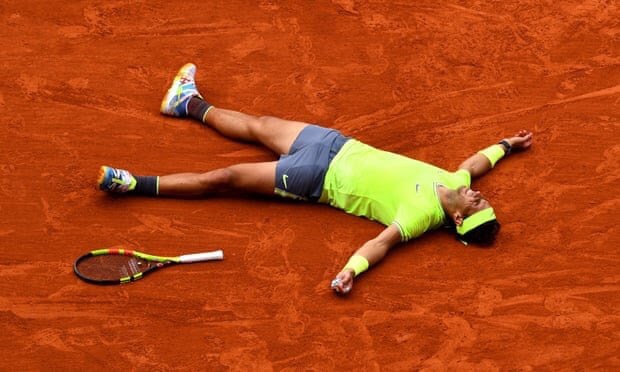 June 9, 2019 wingspansports Joe Ryan, Run it Up, No Subs, Uncategorized Leave a comment

Just an absurd amount of dominance, for the 12th time, Rafael Nadal is a French Open Champion. Think about that for a second. That is equivalent to Tiger Woods winning the Masters 12 times (Tiger’s won the Masters 5 times).

Couldn’t of said it better myself, than this tweet from my college tennis captain and the best tennis player I’ve seen live.

93-2 is just absurd and comical. That’s like UCONN women’s basketball winning 100+ straight games (which they’ve done), the Patriots going 18-0 for consecutive seasons, or equivalent to an NBA team going 80-2 in the regular season. Just an absurd amount of dominance.

In the 2019 French Open, Nadal once again proved that he is still the kind of clay. Just when you think Nadal is slowing down, or coming close to retirement, you put him on clay and he shows why he’s making a case to be the all time GOAT. Nadal defeated Dominic Thiem 6-3, 5-7, 6-1, 6-1. An easy victory for the all time champ on clay. But what makes it most impressive on how easy Nadal made it look is that Thiem is the heir apparent to Nadal’s clay king down when Nadal hangs them up. Thiem, an obvious rising star, thrives on Clay, winning 74% of his clay matches. You would think that Thiem would make it more difficult for Nadal, but it just shows how dominant Nadal is.

With this win, Nadal has 18 career major victories, 2 shy of tying Federer’s record and squarely putting him right there in the all time best player discussion.