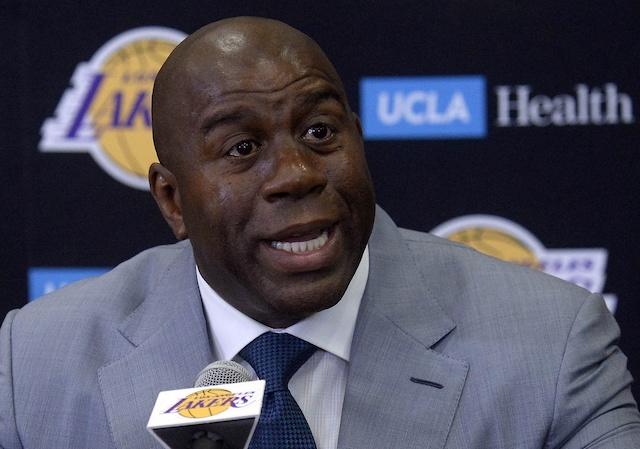 Magic Johnson is stepping down as Lakers’ President of Basketball Operations.

Magic Johnson says he likes to be free to congratulate players such as Russell Westbrook when he hit the 20–20-20 mark. Says he couldn’t be himself and he hasn’t informed Jeanie Buss yet.

Ummmmm this is not real. There is no way this is actually happen. I have so many questions. First of all, why is this happening? Why is Magic Johnson stepping away from being the President of Basketball Operations for the Los Angeles Lakers? It makes no sense. Granted, this is a great thing for the Lakers, because Magic was BRUTAL at that job, but it is bizarre.

But what is most bizarre is his answer as to why he is stepping down. Because he wants to be able to congratulate players when they reach “20-20-20” in a game? Ummmm, Magic, that happened twice in NBA History, it probably ain’t happening again. Is Magic really that addicted to reaching out to players and tampering with them? Do players even like when Magic Johnson reaches out to them?

The NBA is wild. Anything and I mean anything can happen on any given night, from any team, from any player, to any fan, to any front office member. There is nothing out of the ordinary. But, this one is bizarre to me. I just can’t wrap my head around it. There definitely has to be more to this story. Something happened on the inside that caused Magic to step down. Maybe it was LeBron, maybe it wasn’t. But Magic did say if he could’t get any big Free Agents this summer, he was stepping down anyway. So maybe the Lakers knew they weren’t getting any big Free Agents and this was there way to reset? But at the end of the season? It’s very bizarre.

Now what happens to Luke Walton and the coaching staff? How does LeBron react to this? Who does the Lakers hire next? All questions that need to be answered.