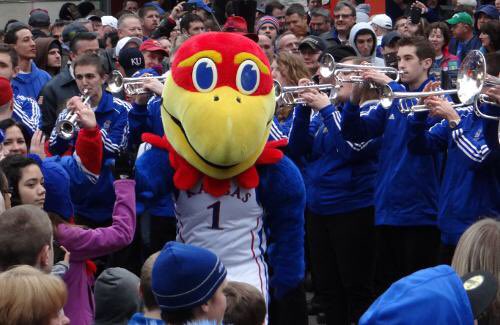 Wait, what? Me being confident? Come on, that can’t be true.

Well, buckle up folks because I’m confident. And I have every right to be. When you look back at this Kansas season everything that went wrong for our team, it did. We started as the preseason #1. We started 9-0. And then everything went downhill and downhill fast.

Udoka went down for the season, Grimes wasn’t living up to his potential (even though he has played well), we couldn’t hit a 3 to save our lives, we had to burn Ochai’s red-shirt year, Marcus Garrett missed 30% of conference games, Silvio de Sousa was suspended for TWO years AND LaGerald Vick left the team in the middle of conference play.

For Kansas to lose the streak

– we had to unRedshirt a freshman and insert him into the starting lineup.

– start 4 freshman, all in which went through their own struggles.

So, yes all those things led to Kansas losing their streak. Kansas has yet to play their best this season. They have difficulties playing away from Allen Fieldhouse and they are now headed into the postseason. If Kansas loses 2 games the rest of the year, the best thing they walk away from this season is the NIT Tip Off Tournament Championship back in November.

And I never felt more confident.

Idk if I’m right by saying this, but I always thought that lately the main goal for Kansas was to win the Big 12 and break the NCAA record. They did that. If the streak was gonna end, it’s good it ended with 4 freshman starting. Time to start thinking bigger again. #kubball

I feel like the same could happen for this Kansas team. I’m not saying they’ll make the Final Four, it’s March Madness, anything can happen. They can win every game the rest of the way, or they can go 0-2 and the season is over. Anything can happen, but I’m confident. I am confident that the four freshman and Lawson will play extremely loose going forward. What else do they have to play for? The streak is over, but that’s not the main goal. A National Title is. They have the talent and you saw this year when they were focused and locked in, they could beat anyone in the Country. But, this team played tight. They didn’t want to be the team that ruined the Streak. But guess what? The streak is over. Now, all they must do is go out there, play loose, use their talent, play together and have some fun. I’m confident we will see a much more loose and relaxed Kansas team. And when we do, it’s going to be a lot more fun watching this team.

And now since Kansas can’t break it down on “Big 12 Champs” like they have for the last 14 years, they now end their practices, saying as a team, “Let the Fun begin”.

So, Kansas, let’s have some fun.

Follow us @Wingspansports for all your Kansas Jayhawks blogs, stories and live reactions throughout the Madness