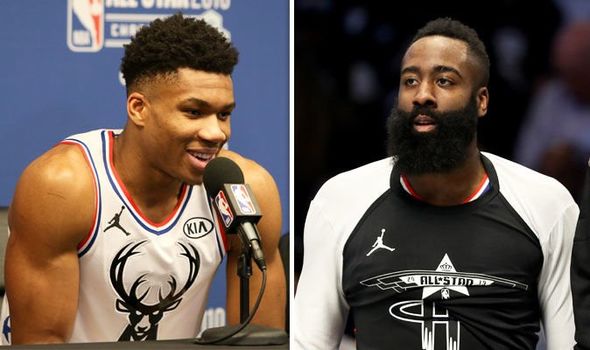 We’re heading into the final ¼ of the NBA season and the MVP award is still very much up for grabs.  When I say “up for grabs” I mean it’s either going to be James Harden or Giannis Antetokounmpo that takes it home.  Both have had tremendous seasons so far and continue to impress on a nightly basis. To be quite honest both of them deserve it, which is why I won’t be mad when either one wins it.  These guys are two of my favorite players in the game today but have vastly different styles of play. This blog is an outline of each candidate’s season-to-date and an argument for each candidate to win the prestigious award.

Let’s be honest, by this point we know that Giannis is the best player under 25 years of age in the NBA and a premier player in all of the league.  He’s also one of the very most valuable players to his team. He has proven it by leading the Bucks to an NBA-best 47-14 record so far this season. The Greek Freak does a little bit of everything on the court and his stats speak to that: In 56 games he has averaged 27 points per game on 58% shooting, 12.6 rebounds per game and 5.9 assists per game, all of which are career highs.  On top of that, he’s getting it done on the defensive end of the floor as well by averaging 1.4 steals and 1.5 blocks per contest. Antetokounmpo is also among the league leaders in field goal percentage.

As Bucks fans know, Giannis has been evolving his game ever since he got drafted in 2013.  He’s gotten better each year by adding new dimensions to his game. He has trained with Kobe Bryant over the past couple summers and it really shows.  That Mamba Mentality killer instinct has rubbed off on him allowing not only him to thrive but also the rest of his teammates. The biggest skill that the Greek Freak has polished since his arrival in the league is his jumpshot.  While it still has many improvements to undergo, his shot went from a disconnected jumper to a much smoother stroke in a matter of years. He’s still got work to do before being considered a knockdown shooter but you can see the improvements coming together slowly but surely.

Over the past week or so Giannis has become the heavy favorite to win the MVP award.  While this is an individual award, the team must be successful in order for a player to win it.  At 47-14, the NBA’s best record, it’s very logical to give the award to the best player on that team.  Another dimension of the award is the highlight plays and full games that the recipient puts together. If you watch any given Bucks game it’s likely that you see Giannis gliding down the floor leading the fastbreak and concluding the transition with one of his signature dunks where he stretches across the lane and flushes it on the opposing center.  Highlight plays haven’t been a problem for the Greek Freak but there is also no shortage of them for the other candidate, James Harden. 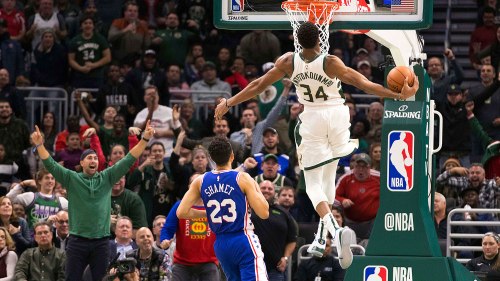 After winning the award last season it appeared in the early stages of the season as if Harden would run away with this year’s award as well.  However, as the season has progressed the race has tightened up considerably. Harden has been asked to do it all for the adversity-laden Rockets this season.  From bringing in Carmelo Anthony to waiving Carmelo Anthony to seeing both Chris Paul and Clint Capela go down for significant amounts of time due to injury, the Rockets have had anything but a smooth season.  Some might argue that those injuries have helped shine the spotlight on Harden more than ever. He’s been tasked with playing hero ball up to this point of the season and has done nothing but excelled in that role.

Harden is averaging a stunning 36.2 points per game, a mark that is nearly 8 whole points better than the next highest scorer in the league.  The Beard is also chipping in 6.2 assists per game and 5.2 rebounds per game. These numbers are obviously lower than Antetokounmpo’s secondary stats but Harden’s argument to win the award is through his scoring.  The one deterrent to James Harden’s season has been his outrageously high turnover rate. He’s averaging a whopping 5.4 turnovers per game but his usage is head and shoulders above anyone else in the NBA so the higher turnover clip is somewhat expected.

James Harden just recently broke his streak of 32 games in a row scoring 30+ points.  This streak is good for second most all time but doesn’t come close to touching Wilt Chamberlain’s record of 65 games in a row.  Harden’s streak spanned over two months and was broken by a 28 point performance in a win over the Atlanta Hawks.

James Harden’s most exhilarating performance came on January 3rd at Oracle Arena.  Facing the Golden State Warriors, the Rockets were short-handed but managed to force overtime.  Harden played out of his mind scoring 44 points, dishing out 15 assists and grabbing 10 rebounds.  Oh, and not to mention winning the game with a deep three in the faces of Klay Thompson AND Draymond Green (who actually fouled Harden in the process) with one second left in overtime.  This was Harden’s fifth straight 40 point game and a defining moment in his MVP race. 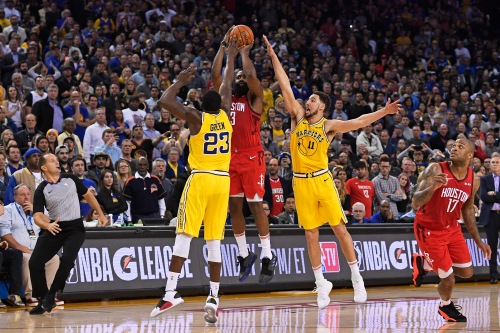 It’s clear that both players are more than deserving of the MVP award.  As the season winds down, watch for both players to make an aggressive push to help their chances of winning.  In past years the race has been all but over by the time we get to the end of the season but that certainly isn’t the case this year.