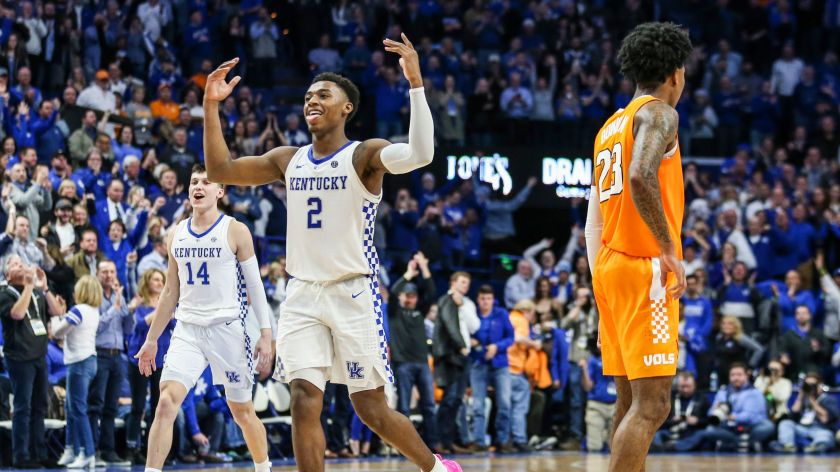 Football has been over for a few weeks so that means the next best thing is college basketball. During football season I didn’t know much about college basketball this year but since football is over i’m all in college basketball. So far it looks like there is one team that is far ahead everyone else but there is a shot someone knocks them off in the tournament. The rest of the teams from 2-10 have real shots at a final four run. Let’s get into my top 10

This team is literally unfair to play against. 3 of the starting 5 players have a very good shot of all being drafted in the top 5 of the NBA draft. After the comeback to Louisville I honestly can’t see this team losing again until the tournament.

I don’t know much about this Gonzaga team since they play on the west coast usually having 11:00 PM games and they aren’t in a power 5 conference. I do know that they beat Duke earlier in the year and that they are very very good this year.

The Wildcats are coming off a huge win over former #1 Tennessee and a pretty bad loss at home to LSU but they had an off night vs LSU. This team didn’t start the year off great but I really like what this team has been doing lately so I think they deserve the #3 spot.

I like this Virginia team a lot but being in the same conference as Duke really hurts them even though they are projected to be a one seed I think Kentucky takes the 1 seed from Virginia because Duke will win the ACC and likely give Virginia another loss.

Much like Gonzaga I don’t know much about this team since they play on the west coast and aren’t in a power 5 conference but I do know they have some real talent and are a very good team. They will most likely end up as a 2 seed in the tournament.

Michigan started the year off great but slowed down and had a couple bad losses but all in all this team is very good. They will make a strong run in march and hopefully redeem themselves in the championship.

This team is pretty good but I think they are overrated. It showed on saturday night after getting beaten by Kentucky. Tennessee will get a high seed in the tournament but will not go far into the tournament.

This UNC team didn’t start the year off great but they have came back into themselves as of recent. I think they will make a strong run in March and possibly to the Final Four.

This team is getting the credit they deserve and I wish they weren’t. This team could very easily make a solid run in the tournament but since they are ranked inside the top 10 it won’t really look too impressive but for a team coming out of a non power 5 conference not named Gonzaga its impressive.

I think this team will win the Big East over Villanova and be pretty good in the tournament. They will most likely be a 2 or 3 seed depending on how they finish out the year but they have some serious talent.