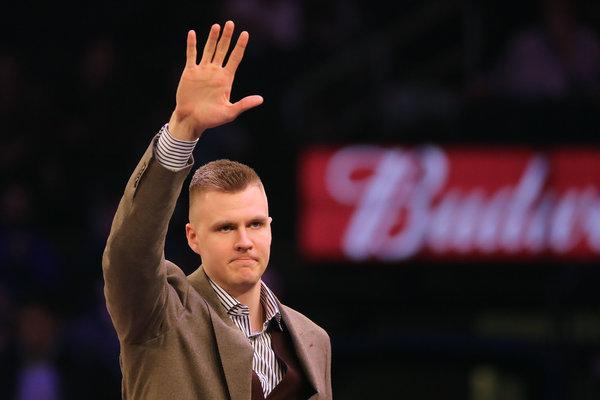 Did the Knicks just make the worst trade in franchise history? Tough to say considering how many bad fucking deals this franchise has made in the past 20 years but dealing KP on a rookie scale contract for a player you could’ve drafted and cap space is up there.

Like what are the Knicks doing here?!?? Two hours after KP and the Knicks meet to discuss the future they deal him? For 10 cents on the dollar…

Did they even entertain other offers? Was Cuban just the first guy to call and Knicks just accepted trash?

The full trade is:

Just looking at this and typing this makes me cringe. You put this deal into 2K and it’s a sure bet to be declined. You need to turn trade override on to overcome a fleecing like this.

Now, the Knicks are fucked.

They just put everything into the 14% chance they get the number 1 pick (Please Adam Silver for the love of God give us Zion), and their ability to sign two max free agents.

The Knicks just opened up $74.6 million in cap space. They’ll throw everything at Durant, Kyrie, Kawhi, Klay Thompson, Kemba, or who ever will take their money.

Knowing the Knicks, odds are were striking out on everyone. Why would anyone want to play for this dysfunctional mess. Perry and Fizdale came in and said the right things and acted the right way from the beginning.

To make this move without any insurances is an all time horrendous move. Odds are much higher the Knicks completely whiff this off season. If that happens, the franchise is doomed for another decade.

Now, lets try to put a damn positive spin on this nonsense.

Here me out.. what if the plan is to trade Kevin Knox, Dennis Smith Jr, Frank Ntilikina and future first round picks for Anthony Davis?

What if they are complying assets to throw everything at the Pelicans to go all in on selling free agents the allure of coming to play with Anthony Davis?

Sounds to good to be true so no chance it happens at all.

My fellow Knicks fans.. we’re in some serious trouble.

If everything fails this offseason, it may be time to burn down the garden.