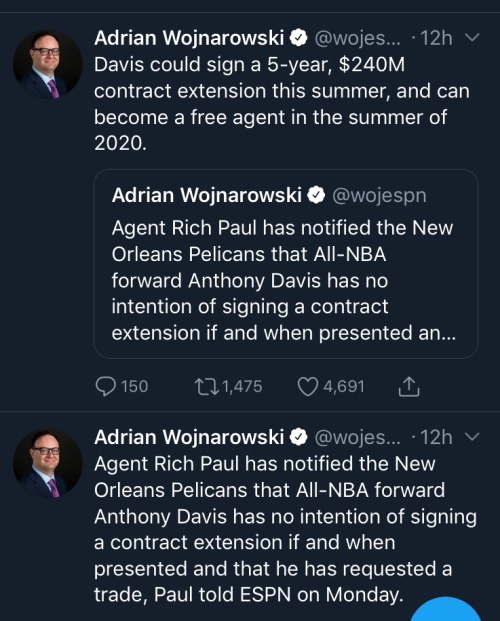 This Woj Bomb was one crazy way to start a Monday morning. The ensuing chaos as everyone started to wake up and see the news made for an unbelievably entertaining day for NBA twitter.

As more rumors came from the day, it’s looking like it’s a for sure certainty the Pelicans will move Anthony Davis either before the NBA trade deadline or some time this offseason.

The Anthony Davis era in New Orleans is over and it’s certainly possible we’ve seen him play his last game as a Pelican.

First thought when I saw the news was “how is it possible the New York Knicks can pull off a deal?”. My next immediate thought was “there’s no chance in hell. We’re the Knicks and destined to be losers forever.”

Shockingly it doesn’t seem as that dream is far fetched. Chris Hayes of Yahoo Sports reported the Knicks will be “aggressive in their pursuit of Anthony Davis”.

Music to my ears!

News got even better when Woj and Brian Windhorst both put it out there that the Knicks would be contenders to land Davis in a deal.

Now we know the Lakers are the favorites to land AD. They have LeBron. Magic Johnson wants him. LeBron and AD could topple the Warriors and the Lakers may be willing to move mountains to get him.

But what if the Knicks were willing to do the same?

The Lakers are likely to start their trade package with Lonzo, Ingram, and a pick.

I would deal KP in the right deal for AD but I would be hesitant and I’m sure the Knicks would be unwilling. Part of getting AD is to dominate with KP.

What the Knicks do have is a choice of 3 players between Frank Ntilikina, Kevin Knox, Mitchell Robinson, and Damyean Dotson.

Sure you can argue Lonzo and Ingram may be better than the Knicks younger players (although the debate on Knox over Ingram can be made) but what the Knicks do have to offer is their 2019 lottery pick.

The 2019 pick holds the Knicks most trade value. The pick is shaping to be a guaranteed top 5 selection (Knicks are the second worst team in the league as of today) and could land Zion Williamson, RJ Barrett, or Ja Morant.

Here’s a 4 team proposal of a deal:

Why it makes sense:

If Pelicans are dealing AD expect them to get out Jrue Holidays contracts as well. Enter the Mavericks as a perfect trade partner. Holiday would be an ideal match next to Luka Doncic.

Pelicans would want to bottom out to make sure both their pick and the Knicks pick is in the top 7 of the draft.

Dennis Smith, Knox, Dotson, Robinson are all young pieces in early stages of their rookie scale contracts that have flashed real upside.

Having not been to the playoffs since 2004, Enes Kanter can provide a nice push with his ability to score and attack the offense glass.

The relationship between Dennis Smith and the Mavericks is fractured and slowly starting to repair. If the Mavericks can flip him/Wes Matthews expiring for a player of Holidays caliber that’ll be a major win for them.

It’s Anthony Davis. Nothing else needed to be said. Trade the future. Trade the picks. Trade anything to get AD in a Knicks uniform.