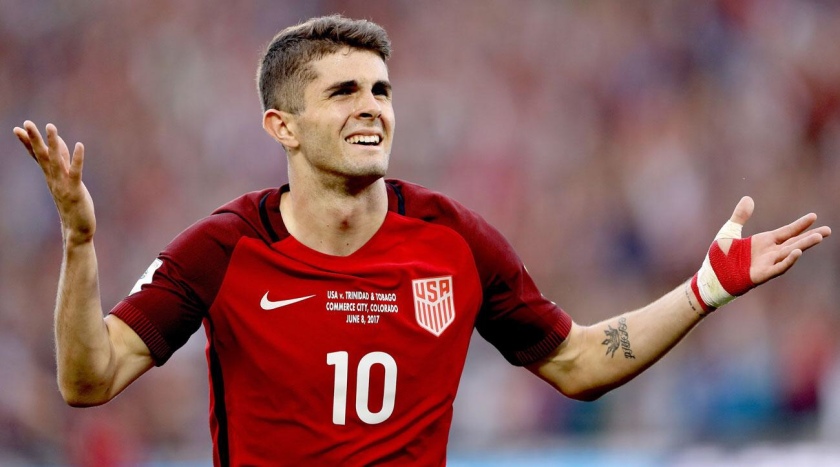 Last week was a pretty wild week, my big brain predicted a Man U win, they won. We predicted Liverpool would struggle but win, they did. We predicted city would roll and they look like a god damn machine again. The biggest news of the week is 3rd-6th on the table is wide open now with Man U rolling, Arsenal stumbling, and Harry Kane’s injury for spurs. We’ll talk about all that in a second but first let’s look at the table after 22 matches played. 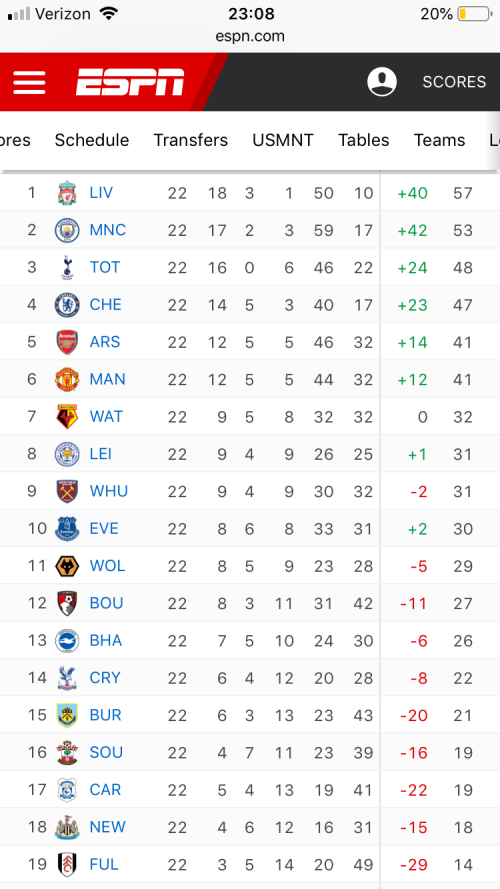 Well start with each game for the top 6 then move to the bottom of the table. Once again Huddersfield is cancelled and already relegated in 20th on 11 points.

Liverpool host Crystal Palace- We start with the front runners, huge win for Liverpool last week. The old Liverpool would’ve lost that game and started to let the title slip away. Palace has hung with the big 6 pretty well this year beating City and only losing to Chelsea 1-0 in their last two meetings against the top. With that said I think Liverpool starts to roll again, especially at Anfield which has become the toughest place to win in the prem. Liverpool win 3-0.

City (2nd) travel to Huddersfield (20th) (Sunday)- Obviously the most lopsided game of the weekend on paper, City are on fire and Huddersfield is dead, dead, dead. The premier league is the toughest league in the world week in week out but still think City wins this one easy 4-1.

Spurs(3rd) @ Fulham(19th)– Listen Spurs probably just had the worst week of the season of any team. Lost to United at home, lost Harry Kane for almost two months, and lost Son until late February. Not great, they play Fulham at the Cottage which will be absolutely rocking on Sunday. Fulham need points to stay alive in the race to escape the bottom. Tough game to pick but I think it’ll be a 1-1 draw and Spurs fans will start to panic.

Chelsea (4th) @ Arsenal (5th) – This is obviously the biggest game of the weekend and complete opposite styles of play. Arsenal will look to push the pace with their attack and press Chelsea. Chelsea hasn’t scored more than two goals since November 29th but got back on track a little last week. This could go either way and should be an entertaining game, with all that said Arsenal have beat Chelsea ONCE in their last 14 meetings. That doesn’t change Saturday afternoon, 1-1 draw in London.

United (6th) vs Brighton– This feels like a trap game for United, coming off their biggest, and best performance of the season winners of 6 straight. Brighton is one of the best defensive teams in the prem and have actually allowed less goals than United. United get reinforcements back with Bailly finally back from suspension and Sanchez reported to be healthy. With all that this would be a classic post Ferguson United let down. I can’t shake the feeling it’ll happen, 1-1 draw and United miss a huge chance to move up in the table.

We already talked about Huddersfield and Fulham, so that leaves us with Southampton (so back), Newcastle, and Cardiff. The three got some breathing room from the bottom last weekend and are all within a point of one another.

Newcastle vs Cardiff — Ohhh boy, this is a massive game for Cardiff bigger for them then Newcastle. If Cardiff lose this I could see the bottom three start to drift far back of the rest of the pack. Cardiff took a massive blow tying Huddersfield at home, they probably needed those three points. Newcastle has been struggling but I think they’re the better team and have more experience in these games. Newcastle win 2-1 and give themselves some breathing room.

Southampton vs Everton– Southampton somehow by the grace of god held on with 10 men last weekend at Kings Palace. Huge win for my saints and they look to keep it rolling with Everton coming to town. Southampton had an awful loss midweek and crashed out of the FA cup on penalties so that put a dent in the confidence. They only need a point here and I think they’ll get it in an entertaining game 2-2.

Bundesliga is back in action after a long winter break, and so is the Scottish league.

Pulisic- Huge game for our lord and savior right off the bat. Dortmund is in first but travel to Leipzig for a tough matchup. It’ll be interesting to see how they play Pulisic after transfer to Chelsea and Sancho taking the world by storm. Don’t think you’ll see Pulisic start but he should come on as a sub but I think Dortmund pull off an upset here 3-2.

Timothy Weah- Our other young hope, Weah just completed a transfer to Celtic from PSG for 6 months to get some games. Honestly a lot has been written about the transfer, as long as he’s playing I really don’t care where. He should start most games for this team, especially since it’s a cup game. Look for Weah to net one, he seems to shine when the lights are brightest on him.