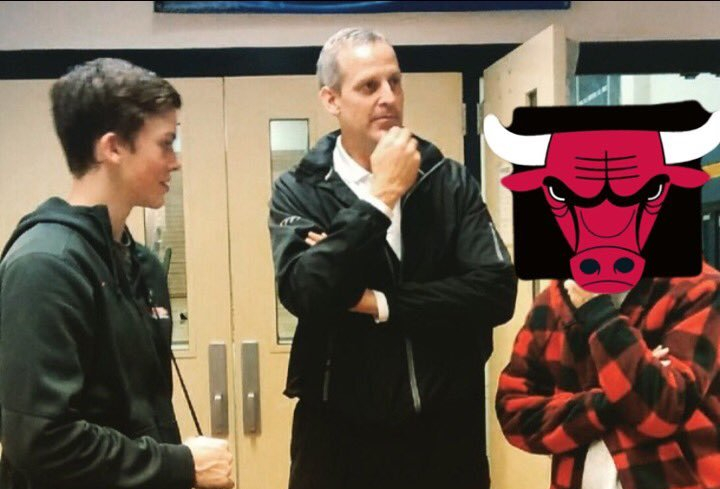 Nope this a not a joke, I’m seriously wondering if it’s not only okay to hop on the Bulls bandwagon this season but to become an actual full time Bulls fan. See back when I was growing up in Mount Carroll Illinois we didn’t have much to do, so we played a ton of basketball. My dad was the Head JV coach at Mt. Carroll High School (Biggest claim to fame: we lost to Hales Franciscan in the 03 State Finals and I was the water boy) and like most coaches kids I grew up in the gym with a basketball in my hand.  But when I look back at it, one of the craziest things in my childhood was that I never watched the NBA. My dad simply always told me that “college was fundamental basketball and the NBA was just one-on-one showboating”. I don’t blame my dad at all, being a high school coach in a town of 1600 people he just wanted me to learn smart system basketball.

I didn’t start watching the NBA till 8th grade and it was only after I made an AAU basketball team (was the shortest guy on the team). Everyone was talking about the NBA and I was so out of the loop I decided “I gotta watch the NBA so i don’t sound like a complete dumbass”. That was ten years ago, so if you do the math I missed the early 2000s era of the NBA. I missed prime Kobe, Mcgrady, Carter, A.I., Dirk, Wallace, Garnett, the list could go on and on. Instead I was watching J.J. Reddick, Tyler Hansbrough, Shane Battier (was a big Duke guy back in the day), and anyone else you could throw into the mix of the early 2000s college basketball era. The crazy thing is that once I started watching NBA I never picked a favorite team, more or less I just watched certain players that intrigued me. Around my junior year of high school I was at a buddies house playing video games and he told me I couldn’t be an NBA fan and not have a favorite team. In his room he had a life size cutout of Kevin Garnett on the T-Wolves and I did what any 17 year old boy would do. I looked over a K.G. and then back at my buddy and said “alright I guess I’m a Timberwolves fan now”. And from that day on I was a “Timberwolves fan”. (terrible photo of my AAU team but I WAS SHORT AS HELL)

The only problem was, I really wasn’t a Timberwolves fan. I never watched their games, looked at stats, or kept up with how the roster was looking. I used it simply as a response to people when they asked who my favorite NBA team was. See, I never got the opportunity to see Jordan play for the Bulls because #1 I wasn’t born yet #2 even if I was my dad would of had me watching college ball instead. I’m a die hard Bears and Cubs fan, but just never got around to being a fan of the Bulls. Yes, I know the Bulls are currently 10-34 and are one of the worst teams in the NBA but I could care less. I’m a guy trying to get in on the ground floor of the process so when the Bulls win their next title I don’t get pegged as a “bandwagon fan”. Bottom line is, do you think the train has left the station or do I still have time to buy my ticket and become an actual “Chicago Bulls Fan”?