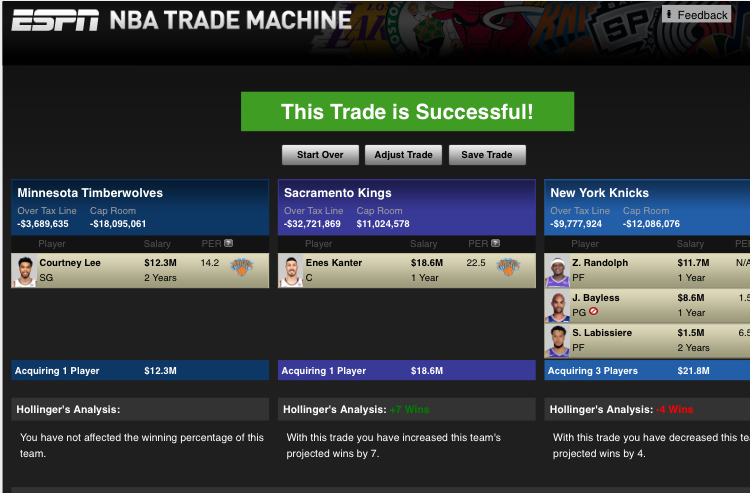 Adrian Wojnarowski reported the Knicks and Kings have had preliminary discussions surrounding a Enes Kanter-Zach Randolph swap. The deal wasn’t reported as close as the Knicks wanted a sweetner in the deal (probably a young controllable player or a draft pick, and if was to work out, a third team was likely to be needed in.

Enter the Minnesota Timberwolves who have a nice expiring trade chip in Jerryd Bayless.

The Timberwolves are sitting at 20-21 and right in the middle of the playoff race. Normally, a franchise that has a hard time attracting free agents, taking Courtney Lee and his contract shouldn’t be an issue. Lee is a veteran presence who can knockdown three’s and play good enough defense. WIth Covington set to miss a significant amount of time, Lee can step in to add depth and help make sure Josh Okogie doesn’t keep playing extended minutes.

The Kings could certainly use Kanter as a lead scoring option of the bench, Willie Cauley Stein is entrenched as the starting center but Kanter would be much more valuable playing minutes over Harry Giles and Kosta Koufos for the stretch run.

The Knicks would be taking back Zach Randolph and Bayless, one of the two would need to be bought out an waived, with the sweetner being Skal Labissiere. The Kings have given up on Labissiere as he’s only played in 9 games this season. Signed with just a $2.3 million contract for next season, the Knicks would be happy to add Labissiere as another reclamation project. The big win would be freeing Lee’s salary for next season and replacing it with Labissiere. The $10 million saved would be enough to open a max free agent spot and would have left over money to add to the roster.

For more NBA Trade ideas and more NBA content also be sure to check me out over at Off the Glass and OTGbasketball.com.