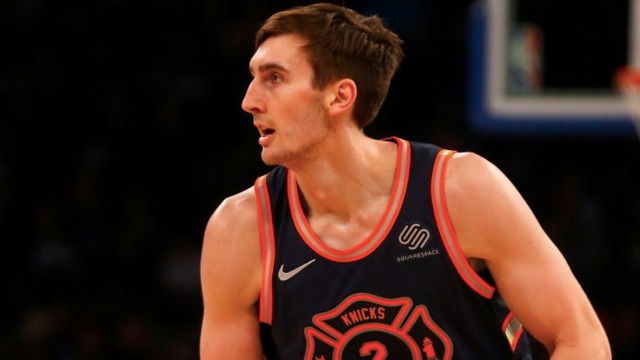 *Wrote this piece for Off The Glass and OTGbasketball.com. If you’re looking for more great NBA content, highly recommend checking us out over at that site as well*

Is it time for Knicks fans to start believing in Luke Kornet? The sample size says no but his play is screaming yes.

Kornet, who is now playing his second year with Knicks, may be a future long term asset. Now that’s not saying he’s going to be a starter on a 50+ win team but his recent play is showing he can be a valuable contributor in the right role on a good basketball team.

Fizdale is starting to show a sense of trust in Kornet and the results have paid immediate dividends.

His shooting splits? Well he’s making 51.4% of his field goals and hitting an absurd 62.5% from three. Kornet has made 15 of his 24 three points attempts as a starter.

Ed Cohen, the Knicks play by play announcer on the radio, dropped a fun little statistic on the last broadcast that Kornet was the all time leader in three pointers made from a Center in Vanderbilt’s history.

Kornet’s ability to be a knockdown three point marksman at 7’1 gives the team more options on offense and is length is helping the defense.

Again, the sample size is small but it’s so clear the Knicks are a far better team with Kornet playing Kanter’s minutes.

Time will tell if Kornet turns out to be a legit and useful player for the foreseeable future but it sure looks like Coach Fizdale is going to give him the opportunity to prove it. In a year that’s all about player development, Kornet is proving to be a true standout.