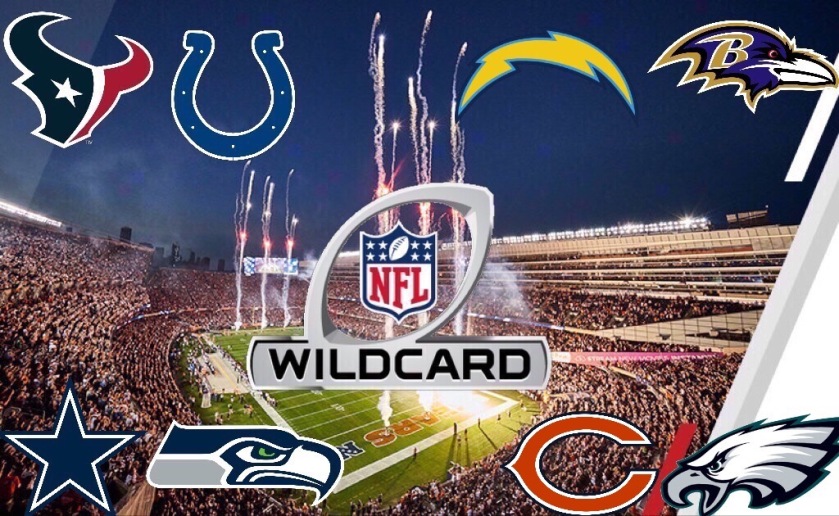 I prefer college football over NFL any day of the week but football is football. Today begins the long awaited NFL playoffs with 2 games on saturday and 2 games on sunday. Wild card weekend is arguably the best weekend in sports and the slate of games this weekend look to be interesting ones. This also looks to be one of the most wide open playoffs in recent memory. I think 10 out of 12 teams in the playoffs are serious contenders for the Super Bowl. The 2 teams I don’t believe can win it are the Texans and Cowboys. I don’t think either team has enough experience to win it but anything is possible. Let’s see how I think the wildcard games this weekend will turn out.

This time slot is usually joked about as one of the worst games of the playoffs with a history of it being Bengals vs Texans or having terrible quarterback play but I believe this game will be an exciting one. 2 top teams in the AFC South will face each other in Houston after both of these teams started the season off very slow. The Texans started off 0-3 and then went on a 11 game winning streak. The Colts started off the year 1-5 and ended the year 10-6. I think this will be a high scoring game and the Colts will come out on top by a score of 42-35.

Both of these teams were not exactly expected to be playoff contenders coming into this year but they proved everyone wrong throughout the season. The Cowboys won the NFC East at a record of 10-6. Early in the year it looked like the champion of the NFC East would come out as 9-7 or even 8-8 but the Cowboys shocked the world when their defense finally clicked and was playing lights out. The Seahawks made the playoffs as the first wild card spot at 10-6 since they pretty much had no shot at beating the Rams for the division. I think this game will be low scoring since both teams have great defenses but you never know with Russell Wilson. I think Seahawks win in a nailbiter 24-21.

These 2 teams have already met once this year with the Ravens coming out on top. The Ravens won the NFC North this year with a record of 10-6 while the Chargers got the 1st wild card spot with a record of 12-4. They lost the tiebreaker to the Chiefs for the AFC West. The difference between this game and the game a couple weeks ago is that this game will be in Baltimore instead of Los Angeles. I actually think this is an advantage for the Chargers since their stadium back in LA doesn’t exactly have the best fan base. I think the Chargers take this game by the score of 27-17.

I think this will be the best game of the weekend with a great defense in the Bears and you never know what you’ll get out of Nick Foles and the Eagles. This game intrigues me because I can see this game going into overtime and ending on a field goal or either team winning in blowout fashion. I really believe the Bears can go on to the superbowl and so can the Eagles especially with Nick Foles under center but I think the Bears win this game by the score of 24-13.