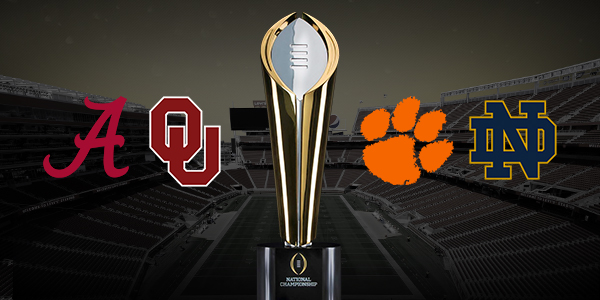 The most important saturday of the year is slowly approaching and that means playoff football. Unfortunately it also means the season is almost over but all good things must come to an end. I mean how can you not know the final 4 playoff teams at this point but if you somehow dont they are #1 Alabama, #2 Clemson, #3 Notre Dame and #4 Oklahoma. There was much controversy over who should of got the #4 spot like there usually is every year but I think they got it right with Oklahoma. Now to get into the 2 playoff matchups and who I believe will win the 2019 National Championship.

This will be the first ever College Football Playoff matchup between 2 undefeated teams. Both Clemson and Notre Dame finished the year undefeated but had very different paths to an undefeated record. Coming into the year Notre Dame was ranked #12 and Clemson was ranked #2. Notre Dame had a lot to prove this year after a disappointing end to last year’s season and they did just that. The Irish got very unlucky with their schedule, they had powerhouses like Florida State, Stanford and USC on their schedule but they both had a terrible year so they weren’t exactly quality wins. They still got a couple quality wins with a win vs Michigan and Syracuse. The only path for Notre Dame to get into the playoffs was if they finished undefeated since they had a weak schedule and no conference championship. Clemson didn’t exactly have to prove much this year. Many people penciled them into the playoffs in the pre season and rightfully so. Clemson didn’t have much competition this year with their hardest games being @ Texas A&M and vs Syracuse. Although they went under a QB change mid-year this team didn’t miss a beat. This will be Clemson’s 4th playoff appearance in a row and this is Notre Dame’s 1st. Sorry Irish fans but I think this will be an easy game for Clemson and they will move onto the national championship with no problem. 38-17, Clemson.

A matchup of one of the best defenses in the nation vs one of the best offenses in the nation. This game will also be the first playoff game ever to have the Heisman winner vs the runner-up. This is Alabama’s 5th playoff appearance in 5 years and this is Oklahoma’s 2nd appearance. Coming into this year Oklahoma was ranked #7 and wasn’t really expected to be as good as last year. With Baker Mayfield graduating many people like myself counted this team out of the playoffs. Kyler Murray surprised many and took this season by storm leading Oklahoma to a 12-1 record and a Big 12 Championship. If there’s anyone that can beat this powerhouse of a defense it’s Kyler Murray. Now onto Alabama and Much like Clemson, Alabama was penciled into the playoffs by many around August and rightfully so. This Alabama team has been nothing but impressive this year. Some may say this is one of the best college teams of all time, I personally wouldn’t go that far but they certainly are the best team in the nation as of now, but they are beatable. People forget that Tua is working on an ankle injury and one bad twist could put out of the game. Although Alabama’s backup isn’t exactly the backup you would want to be facing in Jalen Hurts because who knows what that man will do but it’s definitely better than playing against Tua. Many things would have to go right for Oklahoma to win this game and sorry Sooner fans but I don’t think it’ll happen. Alabama will cover this game but not by much and we will be seeing yet another rematch of Alabama vs Clemson. 51-35 Alabama. 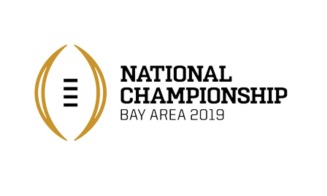 Obviously I don’t know for a fact who will be in the National Championship but my prediction is it will be #1 Alabama vs #2 Clemson. Just what the college football world wanted, another Bama vs Clemson as if we haven’t already seen them play 3 times in the past 3 years. I think this Clemson team is very good but Bama is just another level of good so i’m gonna have to go with Alabama takes home the National Championship……Again. 24-14 Alabama.

If you read College Football Preview 2018-19 coming into the season my playoff prediction was #1 Georgia #2 Michigan #3 Clemson and #4 Texas. I only got one team right but I did have a feeling Michigan and Texas were going to have bounce back years, which they did. They didn’t exactly have as good as a season than I thought they would but they still had bounce back years. I thought the ACC would be much stronger so I had Clemson in at #3 with a loss to FSU and I thought Georgia would be an undefeated SEC Champion which clearly did not happen. I don’t know what I was thinking not putting Alabama in the playoffs but at least none of my final 4 teams had an embarrassing season.