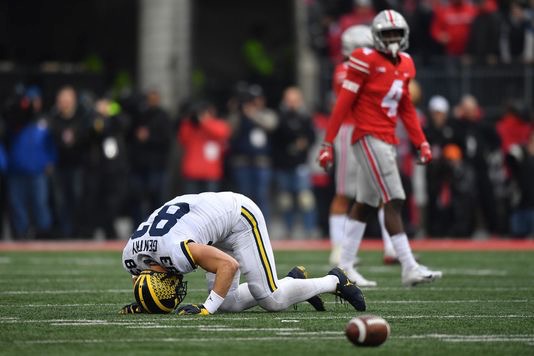 Make sure to read My Updated Top 10: Week 12 before reading this. Coming into rivalry week it looked like a few possible playoff teams would either keep rolling or take a loss and pretty much end their season. With that being said a few teams with real playoff hopes were sadly crushed this week. Now that some top teams are eliminated from playoff talk it looks like some bottom top 10 teams can make their way into the playoffs. Let’s see how my top 10 looks after rivalry weekend.

Pretty easy decision to put Alabama at #1 as they have been here for a couple weeks now and it doesn’t look like there will be any change soon. Alabama heads to Atlanta next weekend to take on Georgia in the SEC Championship.

Another win for the Tigers as they move onto the ACC Championship next weekend vs Pitt. The Tigers will most likely make the playoffs as the 2 or 3 seed and will probably take on Notre Dame in the playoffs.

With this win vs USC it seals Notre Dame’s undefeated season and very likely punches their ticket to the playoffs. Notre Dame does not have a conference championship as they are an independent team so they will not take on anyone next weekend.

Georgia has sneaked into the final playoff spot at 4 but I don’t think they’ll be here for long. Georgia has to take on #1 Alabama next weekend and if they can’t pull off the upset they won’t be in the playoffs.

This was a huge win for Oklahoma now putting them into serious playoff talk if they can just beat Texas next weekend. As of now I think Georgia is in the 4 spot but they will most likely lose to Bama so that makes way for the Sooners.

The Buckeyes have officially spoiled Michigan’s playoff hopes with this win. I think the Buckeyes would still need some help to get into the playoffs because it would be between Oklahoma and Ohio State for the 4 spot.

A very very tough loss for Michigan and all their fans like myself. Now with 2 losses there is pretty much no way we get into the playoffs but we will still make a new years 6 bowl and hopefully be back next season for a playoff run.

With a terrible injury to Milton on Friday things are only going to go down from here for this team. They are most likely going to make a New years 6 bowl but will most likely not be competitive in the game without their star QB.

After losing to Mizzou a few weeks ago this Florida team looks to be back on track after spoiling Florida State’s bowl record. The Gators will most likely be in a new years 6 bowl this year and this team looks like they can potentially be some trouble in the coming years.

Penn State has found its way back into the top 10 but not by their performance. With losses from LSU and Washington State this moves Penn State up a couple spots to give them the #10 spot. The Nittany Lions will most likely make a new years 6 bowl when selection day rolls around.

Teams who have dropped out of my top 10

I am not a huge fan of Minshew and the Cougars, however I do enjoy Mike Leach I just thought that Minshew was very overrated this year. After a loss in the Apple cup this teams playoff hopes and dreams are now crushed and Minshews invitation to New York looks to still be a possibility even though I dont think hes any good.

Wow, what a game this was on saturday night going 7 overtimes and tying for the longest game ever. And now with this heartbreaking loss for Coach O and the Tigers, LSU may be out of a new years 6 bowl but we’ll have to see.