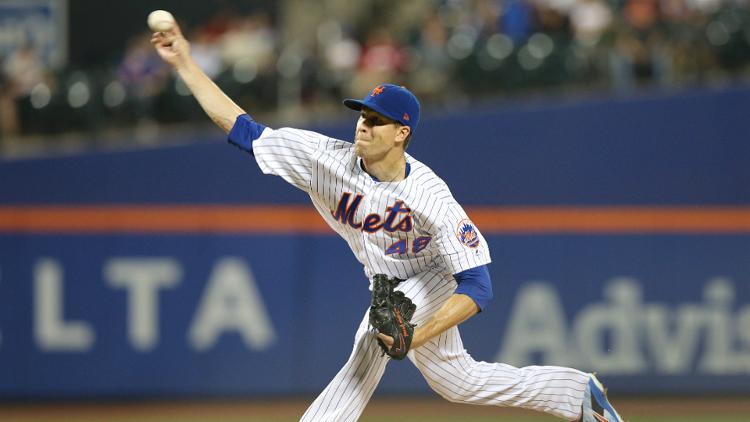 In an otherwise horrible year for the New York Mets, Jacob deGrom was one of the bright spots for this team.  Not only was he a bright spot, he was a shining star putting together one of the best pitching efforts in a season any Met has ever had.  Not only was it one of the greatest seasons a Met has had, it was perhaps one of the best seasons any pitcher has ever had.  Jacob deGrom is the 4th Mets pitcher to win the Cy Young award and joins Tom Seaver, Dwight Gooden, and R.A Dickey in this exclusive club.

deGrom went 10-9 with a 1.70 ERA, 269 strike outs and a 0.91 WHIP over 217 innings of work.  Jacob deGrom also set a major league record with 29 consecutive starts allowing 3 runs or less.  What makes deGrom such a dominate pitcher is his ability to bunker down and get the tough outs with runners in scoring position when they do manage to get on base.  He had a 0.69 WHIP with runners in scoring position this year. Jacob deGrom received 29 out of the 30 possible first place votes for the award with Max Scherzer getting the 1 other first place vote. Aaron Nola finished in third place.

The reason John Maffei, who was the only person not to vote for deGrom,  gave his vote to Max Scherzer was that deGrom only had a 10-9 record while Scherzer was 18-7.  This is flawed logic on many levels but what is sadder is John Maffei barely covered baseball in 2018.  He wrote 3 articles all year about the MLB and non of them had to do with anything related to actually playing baseball.  One of his amazing baseball articles was about the San Diego Padres saluting the preps with a new display and awards.  Why this guy has a vote is beyond my understanding and the MLB needs to look at who has votes and whether they are worthy of that vote year to year.  Jacob deGrom’s record had nothing to do with his pitching and everything to do with the New York Mets inability to score runs when he pitched.  If Jacob deGrom pitched on basically any other team and got marginal run support he would have easily won 20 plus games, so his record is a mute point.

Jacob deGrom is 30 years old and now has won the NL Rookie of the Year Award and NL CY Young Award for the New York Mets.  Jacob deGrom started his career a little later than normal prospects due to Tommy John Surgery while he was in the minor leagues. Jacob deGrom also did not pitch in college as he was a shortstop for Stetson University.  Due to this Jacob deGrom does not have the typical mileage on his arm as your normal 30-year-old Ace. With that in mind, combined with his dominance on the mound, the Mets should strongly consider locking up Jacob deGrom this offseason.  Jacob deGrom has 2 years left of control so I would offer him a 5 year extension locking him up until his age 35 season.  I think 5 more years of dominate pitching is very realistic for Jacob deGrom .

Moving forward into the 2019 season Jacob deGrom will be our ace and be the front runner for another CY Young award.  Being followed in the rotation by Noah Syndergaard, Zack Wheeler, and Steven Matz, the Mets will have one of the top pitching staffs in all of baseball.  If they can fix the bullpen and add some offensive firepower it is going to be hard to stop Jacob deGrom from attaining his first 20 win season. Lets hope the New York Mets and new GM Brodie Van Wagenen realize what is possible in terms of team success when you have front line starters already on your team.  If they make the right moves and spend the money this off-season I truly believe the New York Mets will be World Series contenders as early as next season.  Congratulations Jacob deGrom on a historic season and lets hope we do not squander the best years of Jacob deGrom with average teams.  This type of talent does not comes around  to often so the window of opportunity is wide open for this team.

Follow us @Wingspansports for all your Mets, stories and live reactions throughout next year.