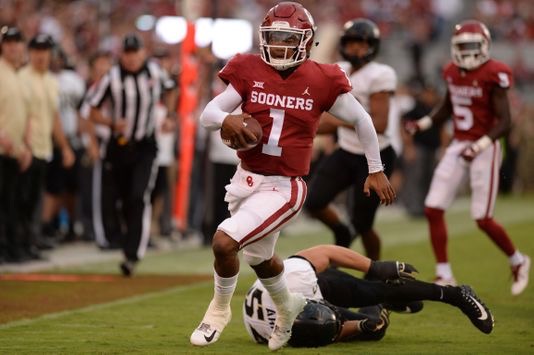 Make sure to read Heisman Watch Week 10 before reading this. Week 11 of college football wasn’t exactly the most exciting for some Heisman hopefuls. Most teams with Heisman worthy players didn’t play vs any real competition as most games these players played in were blowouts. With the season coming to a close in a few weeks after this week there will only be 4 players left on this list. Let’s get into how all these Heisman hopefuls perfmored this weekend.

Murray is one of the 4 players that will stay on this list. Murrays performances all season have been very impressive and continue to be. This weekend vs Oklahoma State Murray had 349 passing yards and 1 touchdown in 48-47 win.

Will Grier has been nothing but impressive this year which leaves him still in this race. In the 47-10 win over TCU Grier put up some big numbers this weekend. Grier had 343 passing yards, 3 touchdowns and 1 interception.

Tua not only has a secure spot in the Heisman race but also has a secure spot at the favorite to win as of now. This weekend vs #18 Mississippi State Tua recorded only 164 passing yards, 1 touchdown and 1 interception. Tua left this game early due to an injury.

The first player to be kicked off the list this week will be Benny Snell. Snell was off to a great start this season but he ultimately slowed down throughout the course of the season. With all the great talent in the Heisman conversation I just can’t see Snell winning it over names like Murray, Grier or Tua.

Haskins is safe on this list as of now. With Haskins great start to the season will stay on this ist until the end of the season due to all his huge numbers in the first couple weeks. This weekend in the 26-6 win over #18 Michigan State Haskins had 227 passing yards and 1 touchdown.

With no more spots left on the list that means Fromm has to go. It hurts to say he is out of the conversation as he was my pre season pick to win the award but he just hasn’t had the numbers to compete with the top players this year.

With only 4 people left here is who I think the 3 finalists would be as of now.

As there are only 4 players left this puts Dwayne Haskins in the 4 spot and would possibly also be a finalist depending on how the voters vote who comes to New York. This weeks finalists are exactly the same as last week as not much happened this week but with only a couple weeks left Murray, Grier and Haskins need to impress the voters to take this award away from Tua.