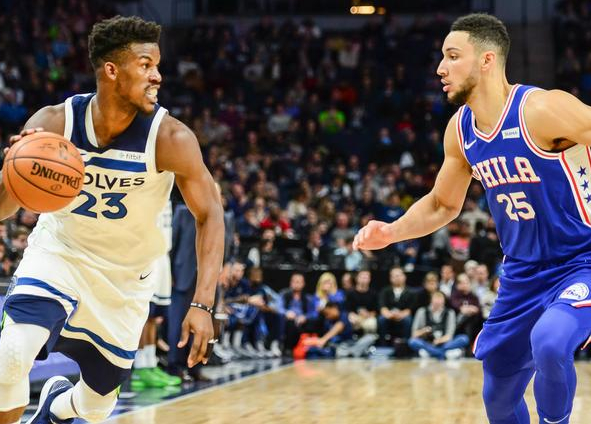 Minnesota has agreed to a deal to send Jimmy Butler to Philadelphia for a package that includes Robert Covington and Dario Saric, league sources tell @ZachLowe_NBA and me.

The NBA is America’s league. I believe that. The NBA is turning into the most unexpected, petty, entertaining league in America. On any given night, the NBA can make a complete 180.

So, let’s break down this blockbuster trade, that just occurred on College Football Saturday. That’s what makes the NBA so good. On a day dedicated to College Football, the NBA takes over. Who won this trade? What were the good and bad for both teams?

The Good: Well, for starters the Timberwolves got a nice package. It’s not the best package and it’s not the four first round picks the Rockets offered, but it’s a nice package. The Timberwolves get back 2 solid NBA starters in Saric and Covington. Saric will slide in nicely into the second unit, which will give the Timberwolves a much-needed scoring off the bench. Covington, will most likely start in Butler’s place. Covington, not as talented as Butler obviously, but possess the same tools on the defensive side of the ball. He is long and can defend the wing well. Covington is a solid 3 and D type of player that can fit nicely with Wiggins on the wing. The other good is that this opens the floor for Wiggins and KAT to grow more. Their development, could be argued, dropped with Butler’s presence there. Maybe it was because Butler demanded the ball, or his hero ball in the fourth quarter, or Thibs leaning on Butler so much, but its Wiggins and Towns team now and that should excite Wolves fans.

The Bad: Obviously, the Timberwolves are losing an All-NBA player. No matter what’s going on, that’s bad. Also, I’m not going to say that Wolves traded Lavine, and Lauri for Covington and Saric, because I know people will say that and it’s fair that they say that. But the Wolves did make the playoffs with Butler, their first appearance in 14 years. So, obviously not fully the case, but would the Wolves future be brighter without the trade? Probably. The other bad is the one that I didn’t like at all. This was a prime example to dump that Dieng contract and the Timberwolves failed to do that. That was a necessity and the Wolves couldn’t get that done. If they did, this trade would’ve been much better for the Wolves. Overall a good deal for a player who didn’t want to be there anymore.

The Good: Same reason as the bad for the Twolves. The 76ers are adding an All-NBA player. Very, very good. The 76ers don’t give up any of their young core of Embiid, Simmons and Fultz and add another All-Star to a weak Eastern Conference. The 76ers have all year now to get the chemistry right for the playoffs. This is a dangerous team in the Eastern Conference, and must be one of the favorites now to represent the East in the NBA Finals. Also, when the 76ers sign Butler long term, the 76ers will be good for a loooong time, and will be the clear winners in this trade. The 76ers are officially back.

The Bad: This is obvious. We saw Butler became confrontational at the end of his tenure with Chicago and publicly confrontational this year with Minnesota. Calling out his teammates wasn’t the best look. Not that Butler was 100% wrong, just not the best look. So now Butler is going to another young core, who is still developing their games. Sound familiar? This is a good deal but the worst-case scenario is that Butler walks in and rattles Fultz confidence more and stops the development of Simmons shooting the perimeter shot. But all that happening is a big IF and I don’t see it happening. Still, they get Butler. If this works out, were looking at a Warriors-76ers Finals.

Follow us @Wingspansports for all your NBA blogs, stories and live reactions throughout the year.