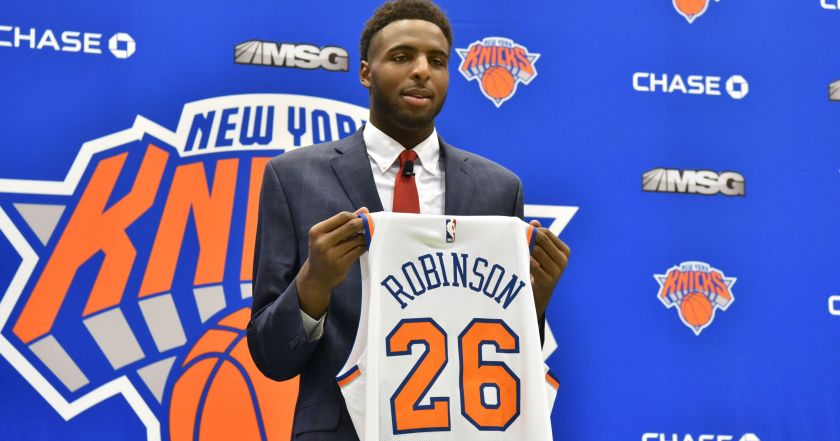 In the 2017 college basketball recruiting class, you’d find few names listed above Mitchell Robinson’s. A 7’1 explosive athlete with a 7’4 wingspan and with the ability to block shots from anywhere on the court, Robinson was as sought after as they came.

Off the court? Well that’s a totally different story and it’s only led to the intrigue of Robinson as he begins his NBA career.

A McDonald’s All American and a consensus top 15 recruit coming out of high school. Robinson initially committed to Texas A&M but decommitted to follow Rick Stansbury, the A&M assistant who recruited Robinson, to Western Kentucky.

After a summer semester and two weeks of practice, Robinson left the team and sought to transfer to either Kansas, LSU, or New Orleans. After taking his visits, Robinson returned to Western Kentucky.

Two months prior to the season tipping off, Robinson withdrew from Western Kentucky and declared for the NBA draft.

And this is where the questions surrounding Robinson began. Is he mentally stable? What type of advice is receiving off the court? Who are the people in his inner circle that keeps messing with his head?

All the questions around Robinson became about his off court journey rather than his natural ability to play basketball.

On draft night, Robinson was considered the wild card of the draft. He choose not to attend the NBA combine and instead hosted his own private workouts. Most teams were never able to get their true scouting report on Robinson for they never saw him play in College and he didn’t attend the combine.

Near the end of the lottery, Robinson name started to appear on Jay Bilas’ best available players. Still no team took a chance on Robinson in the first round despite had he played in College, he would have been a sure fire first round pick.

35 players were selected before the Knicks took a chance on Robinson in the second round.

In a way, going to the Knicks seemed to be a perfect fit. Robinson was headed to team headed for a complete rebuild and was headed to play for a coach that he may actually be able to connect with.

Robinson’s play and body dynamic drew immediate comparisons to Tyson Chandler and Hassan Whiteside. An extremely athletic big that can block shots, rebound the basketball, play above the rim, finish alley oops and clean up the offensive glass.
Remember, Hassan Whiteside had an actually similar background story to Robinson and event spent a few years out of the league before signing with Miami and developing with Coach Fizdale to blossom into the NBA star he is today.

The Knicks initial plan for Robinson was to develop him slowly. They wanted Robinson to play a ton of minutes for the Westchester Knicks this year because 1) Robinson hasn’t played organized basketball in over a year and 2) his game is still so raw for a 19 year old that he may just be unable to compete at the NBA level.

Robinson began to shift that notion once he started his play in the Summer League. There he averaged 13.0 points, 10.2 rebounds and 4.0 blocks in just 24.7 minutes of action. The four blocks per game were a Summer League record.

With a strong summer performance, Robinson began to earn the trust of this coaches. His rapid development left the Knicks comfortable with making Robinson one of the three true bigs on the Knicks opening night roster (Vonleh and Kanter).

With Porzingis still recovering from his ACL Tear, Robinson is the best rim protector on the Knicks roster.

Robinson’s rapid rise intensified when Coach Fizdale gave him his first NBA start against the Warriors in just the 6th game of the year. In 29 minutes, Robinson collected 7 points, 6 rebounds, and 2 steals.

Robinson’s offensive game is limited to pretty much dunks and finishing misses on offensive rebounds but his long wingspan allows him to alter passing lanes and shots on defense.

His hands and on court basketball awareness needs to improve but that will come with time and experience. At 19, Robinson will struggle playing against physical bigs and needs to add more muscle to his frame.

It’ll all be apart of how the Knicks develop Robinson for he’s the true key to the rebuild. As good as the young core for the Knicks looks right now (KP, Ntilikina, Knox, 2019 first round pick), it’ll look way more enticing if Robinson lives out to his potential.

The flashes of a dominant player is all there for Robinson. He’s the man of intrigue for the fans and the front office. His development can rapidly improve the Knicks success over the next few seasons.

Robinson is a player worthwhile to keep an eye on for going forward and it’ll be fun to watch him grow as a player this season.