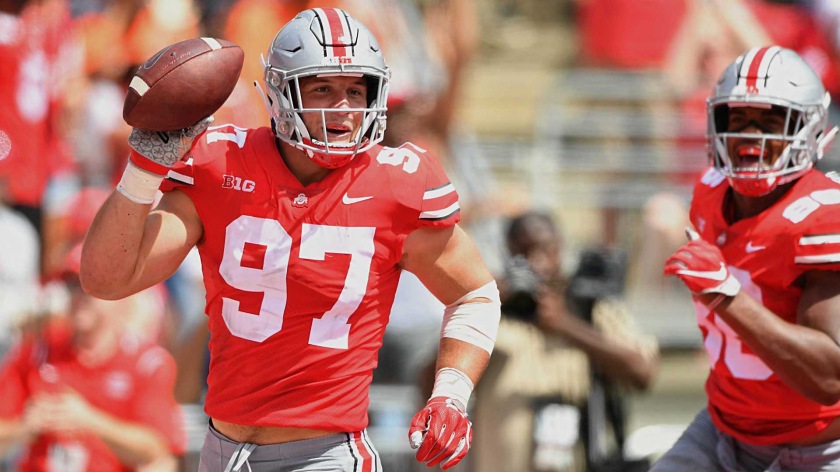 Similar to my Heisman Watch series ( Heisman Watch: Week 1 ) this will be an every week blog after every weekend of college football. This week there was not many surprises with highly ranked teams so let’s get into how my top 10 looks after one week of games.

Although I’m not a big fan of Alabama I still respect them. After a dominant performance this week they seem to be the best team in the nation and very deserving of the #1 spot.

The #1 team going into the playoffs last year and they carry that dominance into this year. The Tigers played a cupcake week 1 and have their first real test next week at Texas A&M but I think they will be fine.

No Urban Meyer, No problem for this Buckeye team. As a Michigan fan it hurts to say this but this team is just really really good. In my opinion a pretty convincing win like this moves them up 2 spots in the rankings.

The Bulldogs put on a good showing this week letting up no points but it was against a cupcake team. Everyone knows this team has tons of talent after a 45 point win and their performance year so you can expect more games like this for the Bulldogs.

There were questions about the Sooners coming into this season after losing Baker Mayfield but after a win like this it looks like all the questions have been answered. Granted FAU is not a power 5 team but QB Kyler Murray looks like a great replacement for Baker and the defense looks a lot better so another great season for the Sooners is very likely.

I do not have Wisconsin at #6 because they are bad but rather because the other teams are so good. Wisconsin has plenty of time to get back into the top 4 but after other team’s performances this week I believe they belong at #6.
#7 Auburn Tigers (1-0)

A win over the #6 team in the nation last week is a big help for Auburn’s playoff case. The Tigers looked great on Saturday afternoon and I expect them to be a serious contender for the SEC this year.

I don’t think anyone expected this to happen (besides me). LSU puts up 33 points and only let up 17 points against #8 Miami this week and the Tigers look to be a legit team this year so expect the Tigers to be a contender in the SEC.

The only team inside the top 10 with a loss is the Huskies. To a common fan that may not make sense but it does. The Huskies played a super competitive game against a great team in the Auburn Tigers. This is the best possible loss for the Huskies and now starting the season off 0-1 they still can make a case for the playoffs.
#10 Notre Dame (1-0)

After a win against the Wolverines, Notre Dame looks be a great team this year. The Irish defense looked pretty good against Michigan forcing a fumble and an interception and the offense put up a good amount of points so after this win I would expect a great season from the Irish going forward.