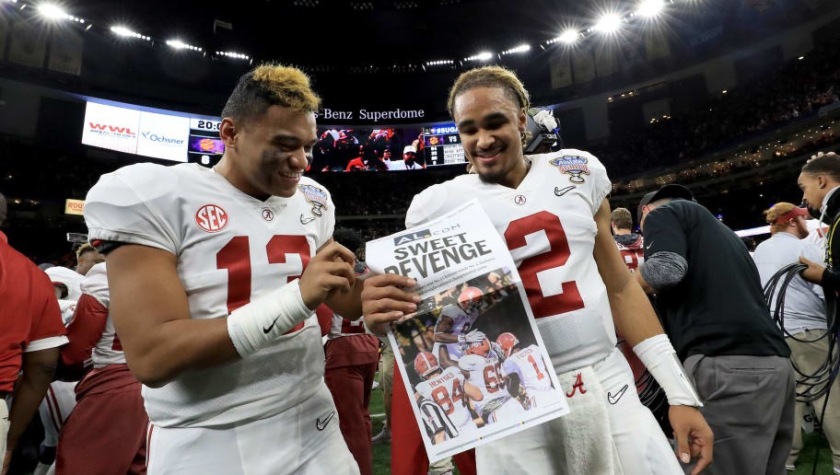 The situation in Alabama is more of a good problem than a bad one. Nick Saban and the Crimson Tide have 2 outstanding quarterbacks in both Jalen Hurts and Tua Tagovailoa. This is very unlike Alabama to have 2 great quarterbacks since they never really have a great quarterback. Don’t get me wrong there a great team but they never have an outstanding quarterback that is the heisman talk like Tua is rather their defense is usually the key to Alabama’s success. If you are not familiar with the situation here is a short explanation of it.

So Jalen Hurts has been the starting QB for Alabama for the past 2 years. He has been to the national championship both years. Tua was the backup QB last year as a freshman. This whole problem started in the second half of the 2018 national championship game. Alabama was losing 13-0 to the Georgia Bulldogs. Hurts was not having his best game so after halftime coach Nick Saban made a huge gamble and put in freshman QB Tua Tagovailoa. Tua ultimately brought alabama back into the game and tied it at 20 to bring the game into OT. On 2nd & 26 Tua threw the game winning ball to WR Devonta Smith. At the end of the game Hurts’ stats were 3 for 8 completion, 21 yards and 0 touchdowns and Tua’s stats were 14 for 24 completion, 166 yards, and 3 touchdowns. To the common fan it may not make sense that this is even a conversation and may just be saying “the starter just had a bad game if he was good for every game besides one leave him as the starter” but you could tell from the game that Tua was just something different. Now let’s get into each quarterbacks backgrounds and stats.

Hurts is from Houston, Texas. He is 6 ft 2 in, 218 lbs and was a 4 star quarterback from the class of 2016 and now Hurts is a junior coming into this season after 2 years of success at Alabama (2016 Peach Bowl, 2016 National Championship, 2017 Sugar Bowl, 2018 National Champion) so all things point to another great year for Alabama. In my opinion Hurts is nothing but an average QB but the team around him makes him look better than he actually is. Nick Saban avoids talking about this topic but it is clear that Saban believes Hurts would be a safer option since he has proven his success and also does not turn the ball over often.

Tua is from Honolulu, Hawai. He is 6 ft 1 in, 219 lbs. And was a 5 star quarterback from the class of 2017. Tua is now a sophomore at Alabama and is yet to even start a game but is somehow still the heisman favorite. After his great performance against Georgia all things do point to an amazing season from Tua if he does wind up starting but you can be the judge after watching these highlights from both quarterbacks.

PS: Jalen Hurts had the worst haircut ever I mean just look at where the dreads started.