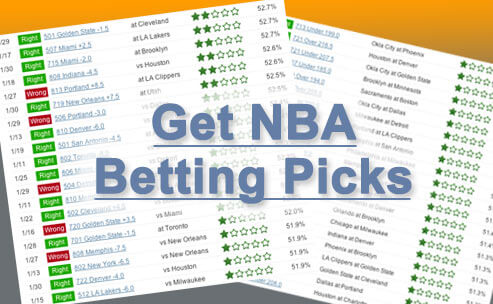 The Westgate sportsbook in Las Vegas released their over/unders for NBA win totals for the 2018-19 season earlier this month and the Wizards were set at 44.5. That, of course, sparked some debates among fans and the media.

Chase Hughes and Nick Ashooh gave their take on the matter in the video above. For reference, here are the win totals as set by Westgate:

Recently, the NBA schedule was released and of course, the NBA over/under win totals came along with it. With sports betting legalized nationwide, everyone can place their bets on what they think is going to happen this NBA season.

After taking a look at these over/unders, I honestly believe there is actually FREE money to be won here. It was amazing to me to see these lines.

So, what I’m going to do is give you my best bets that you should take and the only way you have to pay me back is by following @Wingspansports on twitter, so we can discuss how you’re doing with these bets.

Let’s just get right into getting you guys free money!

Over, Over Over !!!!! This is an absolute must take if your gambling. Absolute free money here. When was the last time Pop was only 3 games above .500 for a season? The Spurs are severely underrated going into this season. Last year, the Spurs won 47 games and made the playoffs and only got 9 games out of Kawhi. This year, they have the same team, minus Kawhi (non-factor last year anyway) and adding an All-NBA, determined, pissed off Demar Derozan. So, how is that team 4.5 games worse? Get outta here.

Over, Over, and then over again !!! Free money.

I know, LeBron is gone and people thought this team sucked last year with LeBron. I get it. But you’re telling me a team with Kevin Love having free reigns like he did in Minnesota, with Colin Seton, Larry Nance Jr, Rodney Hood and Sam Dekker can’t win 31 games in the East? They’re not gonna be 1 game better than last years Knicks (29 wins) and 5 games worse than last years Hornets (36 wins). Cavs will get to 31 wins. Give me the over.

Again, I understand things are shaky in the locker room. I know Butler is frustrated, along with Wiggins and KAT. But, if Thibs could just figure out how to use a bench, this is a 50+ win team. Butler missed 23 games last year and the Wolves still won 47 games. So, even if he doesn’t play all 82, but more than 59, this Wolves team is a much better team than 44 wins. Give me a break. Free money.

How did this team get worse? I understand Boogie is gone but if they resigned him they wouldn’t have him back until late in the year and then they wouldn’t be able to sign anyone else. Last year we saw what an unleashed Anthony Davis could do to the NBA and that’s being one of the best players in the NBA. His second half of the season put him in the MVP voting, which he placed third in. Ho-him. Then they go out and add Julius Randle, a versatile big that AD can play along side with. They also add Eldridge Payton, a guy who didn’t start his career hot but averaged 12 & 6 in the second half with the Suns. Payton backing up Jrue Holiday, who could be as talented as anyone, is much better than 45.5. Over!

I’m sorry, but this team is just still not good. Sure, they have a great frontcourt with Bamba, Gordon, Isaac and Nikola but who’s getting those guys the ball? Who’s running point? Who’s the wing players? Who can shoot? There’s so many question marks and in a guard league, they don’t have the answers. This team is gonna be a top 3 lottery team so go under for the Magic. They’ll be lucky to get to 25 wins, forget 32.