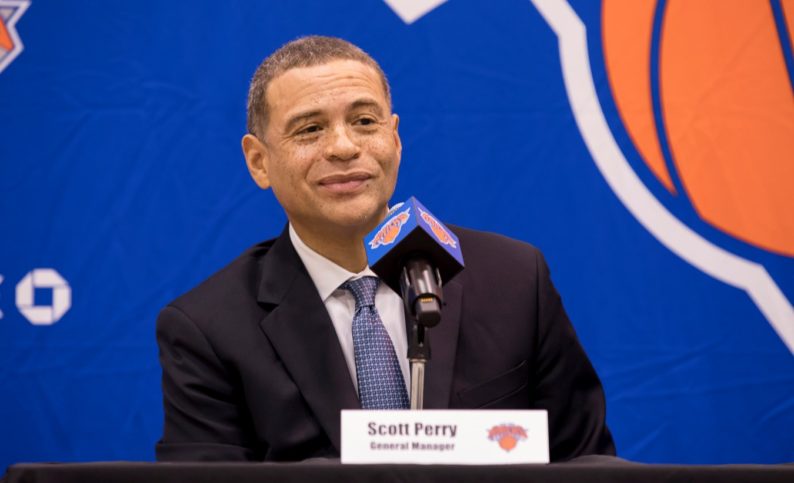 When Scott Perry was hired as the GM of the Knicks on July 14th, it signified a complete overhaul in regime change for the organization. The Phil Jackson era had ended and the Knicks were in a position that most organizations fear which is hopelessness.

Take a quick second to scan over the issues that were presented to Perry when he took over the role.

He joined the team with the following problems:

As Perry was tasked with rebuilding the Knicks, there were three underlying themes in his introductory press conference: Youth, Defense, Patience.

Perry knew the era of “quick fixes” was over and he needed to rebuild the roster from the bottom.

The first quote that stood out was:

At the time the core of the Knicks were Porzingis, Ntilikina, Hardaway, and Dotson. Luke Kornet and Isaiah Hicks were players on a two-way contract.

Perry then added “I will work tirelessly to develop a culture that demands results, commitment and pride from everyone fortunate enough to be associated with our team — from our staff to our players”.

This was music to Knicks fans ears. Now came the time to turn talk into action.

Perry’s first big move was dealing Anthony to the Oklahoma City Thunder for Enes Kanter, Doug McDermott and a 2018 second pick via Chicago. With this move, the wheels to the rebuild started to turn.

Come the deadline, the Knicks were active. They had found a diamond in the rough with Trey Burke to add to the young core Perry had emphasised and was able to flip McDermott for Emmauel Mudiay.

Between Mudiay, Burke, and Ntilikina, it gave the Knicks three ball handlers all under 25.

The Knicks were so able to flip Willy Hernangomez to Charlotte for future second picks in 2019 and 2021 filling the need of acquiring future draft assets.

The motion became more clear with the firing of Jeff Hornacek and the hiring of David Fizdale.

Fizdale has a strong reputation of being a players coach and has a knack of having his player competing and ready to play each night. Fizdale can easily relate to the Knicks younger talent and focuses his coaching style to player development.

The Fizdale hiring was a true sign that the Knicks were headed into the right direction. Fizdale was their targeted hire and Perry was able to bring him aboard.

The patience and youth aspect really started to pay dividends for the Knicks this offseason. In the draft, the Knicks were able to grab Kevin Knox with the 9th overall pick and took Mitchell Robinson with the 36th overall pick they received in the Carmelo Anthony trade.

As soon as the summer league began, Knox and Robinson became two of the most talked about players in the league. Both flashed immense potential and knox truly looked like a day one contributor from the beginning.

Kevin Knox was an All-First Team Summer League player averaging 21.3 points and 6.5 rebounds in his four games and Robinson led all summer participants in blocks per game swatting away four per game.

As the league ended, the consensus draft grade for the Knicks varied between an “A” or “B”. The Knicks for the first time in awhile, started to receive positive takes about their future outlook.

In free agency, the Knicks didn’t go out and overpay for a veteran passed his prime. Instead, the Knicks targeted Mario Hezonja and Noah Vonleh, two players who are still just 23 years of age and still have significant upside left ahead of them. Between the two of them, they’ll make a combined $9 million in salary. Fairly good value for two former lottery picks who may just need to find the right change of scenery and fit to tap into their potential.

Perry has also been smart in not buying out Noah on his contract. Perry knows the Knicks are not yet able to compete for a playoff spot with the Porzingis injury so there’s no harm in letting Noah play a game every now and then and to collect paychecks before the contract expires.

If the Knicks were to buy out Noah, they’d be eating between $5-$6 million in dead cap space for the next 5 years. That’d be a self inflicted wound that wouldn’t be necessary. Plus Noah, may be able to be dealt next year when he’s on a one year expiring deal. They say there’s nothing more valuable that expiring contracts in today’s NBA.

The Knicks will have between $18-$30 million in cap space for the 2019 offseason and all indications are they’ll likely have a top 5 pick in the upcoming draft. A draft headlined by players such as R.J Barrett, Nassir Little, and Cameron Reddish.

So as the Knicks enter the 2019 season, fans can expect the team to be bad, bottom five team in the league type bad.

Although, that means Perry is doing his job and doing it well.

The Knicks will enter next year with the following roster:

With cap space, a high selection in the 2019 draft, Porzingis coming back from his ACL tear, the development of Knox, Ntilikina, and Robinson there’s finally hope on the horizon for the Knicks and their fans.

The future outlook is no longer so bleak. For that, Scott Perry deserves the praise for implementing and following it up with action. Another good offseason next season and the Knicks may look like a formidable foe in the East for years to come. Who could have saw that one coming just a season ago?