We have taken a look at all infield positions so far and we now take a look at the most competitive position. Go ahead and think of your list of top 10 greatest hitters of all time right now. Got them? Okay, now of those 10 hitters how many of them were outfielders? I would assume that at least 5 of those players that you’ve listed were outfielders. If you have a list of top 10 with less than 5 outfielders, then please comment below letting us know what your list is. We would love to see it.

Since outfield is the most competitive position to do a “greatest of all time” list for and since we are looking at general outfielders as opposed to Left, Right or Centerfielders, we will include 5 honorable mentions. So, let’s get started.

The all time hits leader, Rose was the greatest utility player of all time.

While he played 1327 games of his career in the outfield, he also played 600+ games each at 1st base, 2nd base and 3rd base. Though he wasn’t a home run hitter, Rose does rank 2nd all time in doubles with 746 and led the league in that category 5 times. He also holds the record for most seasons with 200+ hits with 10, a record that was tied by Ichiro Suzuki. Rose also ranks 6th all time in runs scored, leading the league 4 times.

The player that influenced a generation of young fans with his backwards hat and beautiful swing, Griffey was an all around talent. While in Seattle, few players of the 90s matched Griffey’s talent. However, he suffered a significant decline once he moved to Cincinnati and injuries took their tole on him. Before Sammy Sosa entered the home run picture in 1998, Griffey was the one that fans and analysts speculated would combat McGwire for the single season home run record. In fact, Griffey was well on pace to break the record in 1994 with 40 before the strike cut the season short. In 1997 Griffey battled against McGwire for the record falling short with 56 to McGwire’s 58. The following season Griffey again paced with McGwire and Sosa before coming up short once again hitting 56. Though his bat earned him the most praise, he rarely hit for average batting over .309 just twice in his career and over .300 an additional 6 times. He was a great fielder though, earning 10 Gold Gloves during his career.

Blackballed from the MLB over his participation in the 1919

Black Sox Scandal, Joe Jackson was one of the greatest natural hitters of all time. Jackson wasted no time convincing the baseball world that he was a star. Jackson is the only rookie to ever bat over .400 when he did so in 1911 with a .408 average. He would continue his success the following season with a .395 average. Despite never leading the league, he had an additional 2 seasons over .370 and ended his career with a .356, ranking 3rd all time. It is unknown what his role in the 1919 Black Sox Scandal truly was, but regardless it is a shame that the MLB lost Joe Jackson at the age of 32, after batting .382.

Clemente was an exquisite fielder during his career, winning 12 Gold Gloves. He also had a great throwing arm, tossing out 266 runners on the bases. At the plate, Clemente was masterful. It took him a few seasons to warm up, but by 1960 he seemed to have figured it all out. During the 13 year stretch from 1960 until his untimely death in 1972 he posted a .329 average, leading the league 4 times. Not much of a power hitter, Clemente did manage 16 homers, 25 doubles and 10 triples a season during that span as well.

Aaron was a man of consistency and longevity, playing at a high

level for 23 years, 21 of which he was an All Star. Aaron holds the career record for RBI, Extra Base Hits and Total Bases and ranks in the top 5 in hits, runs scored and home runs. Aaron also led the league in home runs 4 times, RBI 4 times, batting average twice and doubles 4 times. He was also a 3 time Gold Glove winner.

Speaker is arguably the best outfield arm of all time. He holds the record for most career outfield assists with 449 and also has the single season record for most outfield assists in the American League with two seasons of 35. Along with his throwing arm, Speaker also knew his way around a bat. He is the all time leader in doubles with 792 in his career while leading the league in that category 8 times. Though he only led the league in batting average once when he batted .386 in 1916, he batted over .350 in 8 additional seasons and has a career average of .345.

incredible to think that he played most of his career on a bum leg. He had one of the most impressive Triple Crown lines when he won it in 1956 with 52 homers, 130 RBI and a .353 batting average. In 1961, he paced with Roger Maris for Babe Ruth’s single season home run record before having to succumb to the pain of his hip, ending with 54 home runs. Though he didn’t break the record, he still led the league with a .687 slugging percentage to go along with his .317 average and 128 RBI. 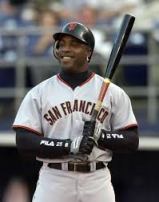 Though not as popular as he once was, there is no denying how good Bonds was during his career. He is the home run king holding the record for both single season and career home runs. He also holds the record for career walks, single season walks and the two highest single season OBP. In 2004, Bonds reached base an amazing 60.9% of the time while leading the league with a .362 batting average and .812 slugging percentage. Despite walking a record setting 232 times that year, Bonds still managed to hit 45 homers. Even before Bonds became the man of many homers in 2001, he was a great ballplayer, winning 3 MVPs and 8 Gold Gloves.

Most well known for his impressive 56 game hitting streak, Dimaggio

was much more than those 56 games. Dimaggio always did hit for a high average, leading the league twice and batting over .350 three times with a high of .381 in 1939. He was also a capable home run hitter, again leading the league twice with a high of 46 and regularly hitting 30+. He also averaged an impressive 143 RBI and 130 runs scored a year throughout his career. He was a solid fielder as well, manning centerfield for the Yankees throughout his career while accumulating 153 outfield assists.

One of the best all around hitters of all time, yet not as well recognized as some others on this list. Musial is the only player on this list to rank in the top 30 all time in just about every major offensive category except stolen bases. He also led the league in batting average 7 times, RBI twice, walks once, doubles 8 times, triples 5 times, runs scored 5 times, OBP 6 times and slugging percentage 6 times. Though he never led the league in home runs, he did launch 475 in his career ranking him 30th all time. His 1377 extra base hits ranks 3rd all time while his 3640 hits ranks 4th and his 6134 total bases ranks 2nd all time.

The ultimate five-tool player, Mays could simply do it all. He is

What? Babe Ruth, not t #1, this is blasphemy. However, Ruth played in a time when pitchers didn’t know what to do against power hitters and fielders didn’t use the lefty shift until 10 years after he retired. While Ruth would still have the ability to hit mammoth home runs, don’t expect that his batting average would be anywhere near the .342 mark that he had if he were playing in the modern era of the game. He would likely fall to a more modest .305-.310. Pitchers in the modern era are well trained in pitching to power hitters, thus Ruth would rarely get a good pitch to turn on and would have to be adaptable to drive pitchers regularly touching the corners. Taking that into consideration, there is no denying that Ruth was one of the greatest hitters of all time, but there are 2 players who had careers that translate better to the modern era.

One of the most fierce competitors of all time, Cobb holds one of

the most unbreakable records in baseball with his career .366 batting average. Cobb would be slowed down by the rules of the game today in that his frequent spikings and collisions would undoubtedly lead to several fines and ejections. However, his style of play would be just as effective today as it was in the early 1900s. He was a slash hitter with speed which led to his high batting averages year after year. And once he got on base, he was a menace. He got into the mind of pitchers while on the bases and disrupted their entire rhythm, thus making the players batting behind him even better. Cobb was also a great fielder, manning centerfield for a majority of his career. He ranks second all time in Outfield assists with 392. That and his “need to be the best” mentality is what lands him in the #2 spot on this list.

The first player to regularly face the extreme lefty shift when it was employed by Lou Boudreau, then managing the Indians in 1946. It was also implemented during the World Series that season and many times throughout the rest of Williams’ career. Ted’s first four seasons dealing with the shift vs the first four seasons of his career saw a slight decline in his batting average from .356 to .349 due to the shift. However, even with this decline, Ted was the greatest hitter in the league as his slugging percentage remained the same at .642 and his OBP actually increased from a .481 to a .496. After a few years of stubbornly batting into the shift, Ted began to bat against it and saw his batting average shoot back up to a .355 between 1952 and 1955 while maintaining the .496 OBP and raising his slugging to an impressive .662. There is a reason why many consider Ted Williams to be the best hitter of all time. While we spoke in length about his ability to get on base, Williams also averaged 37 home runs, 37 doubles, 127 runs scored and 130 RBI a season throughout his career. Making him one of the best multidimensional hitters to play the game.