Moving forward with our lists, we will take a look at the position of first base. The first base position is one position that hasn’t seen much change over the years. The typical first baseman is a relatively heavy footed player who can hit for power. This is evidenced by taking a look at the 500 Home Run Club and you will find that 9 of the 27 members played over 1000 games at first base and 2 others (Ortiz & Frank Thomas) played a majority of their games at first when they were not the Designated Hitter. In the late 1800s, first basemen had high averages but since the end of the Dead Ball Era a first baseman that had a high average is often seen as a bonus that goes along with their power hitting.

A man well known for hitting the ball hard and far, McCovey led the league in homeruns on 3 separate occasions. His highest mark (45) came during his MVP season of 1969. That same season, McCovey led the league with a career high 126 RBI and a 1.108 OPS. Never much of a for-average hitter, that 1969 campaign would be the only time McCovey would break .300 mark when he batted .320 for the season. He did have limited defensive ability posting one of the lower fielding percentages by a first baseman at .987.

No player resembled a power hitter better than Mark McGwire 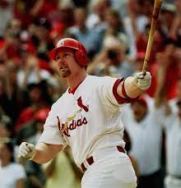 during his career. His home run chase with Sammy Sosa in 1998 took the world by storm, but McGwire was a prolific home run hitter since his rookie year in 1987 when he set the rookie record with 49 home runs. In the 2 seasons leading up to his historic 1998 run, McGwire blasted 52 and 58 home runs. Then in 1998 he obliterated Roger Maris’ record by hitting 70 home runs, followed by another 65 in 1999. Both of those seasons McGwire drove in 147 RBI. Not much of a hitter for average, McGwire did manage to bat over .300 twice in his career. First in 1996 with a .312 average to accompany his 52 home runs and then a second time in 1999 with a .305 average to go with his 32 home run campaign. 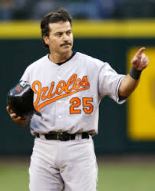 One of only 6 players to compile 3000 hits and 500 home runs in their career, Palmeiro was a player of consistency. Palmeiro hit 20+ home runs and doubles in each of his 14 seasons between 1991 and 2004 with 4 seasons over 40 home runs and another 5 seasons with 38 or 39 homers. During the span he also drove in 100+ RBI 10 times, scored 95+ runs 9 times and batted over .285 8 times despite being named an All Star just 3 times. Palmeiro was also a top fielding first baseman with a .994 fielding percentage. 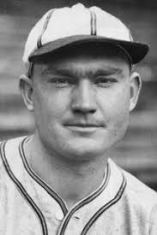 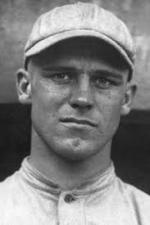 Sisler began his career at the tail-end of the Dead Ball Era and thus is a different breed of first baseman as the others on this list. He did have a display of power in 1920, in comparison to the era, when he hit 19 home runs. The only other player in baseball to hit more than him that season was none other than Babe Ruth with his 54. However, Sisler’s game was speed and making contact. He only had one season in which he batted under .300 and had two season in which he batted over .400. His .420 batting average in 1922 is the 3rd highest single season batting average since 1900. During his career Sisler led the league in hits twice, triples twice, runs scored once, stolen bases four times and batting average twice.

Votto takes a step back from the typical first baseman in that he doesn’t have the normal power numbers expected of a first baseman. He hasn’t reached the 40 homer plateau, but has hit 25+ in 6 of his first 10 seasons and hit 30+ doubles in each season. Instead he hits for average and has a knack for getting on base. His first full season in 2008 was the only season, other than an injury plagued 2014, that Votto did not bat over .300 or put up an OBP of at least .400.

The face of Boston in the 2000s, Ortiz had an uneventful beginning 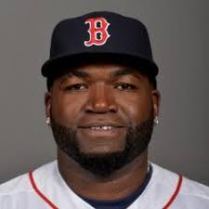 to his career while in Minnesota. When he joined the Red Sox in 2003, he found a surge in power and production that elevated him to a household name. His power surge peaked between 2004 and 2006 when he compiled 142 home runs and 424 RBI while slugging .614. His power numbers fell back to earth for the next 6 seasons as he compiled 170 homers, 563 RBI with a .545 slugging percentage. He did find a resurgence in his final four seasons with 140 homers and 442 RBI. Ortiz is also recognized for coming through big in the postseason. However, where Ortiz falls short is his inability to field. Throughout his career, Ortiz only played 278 games in the field, 132 of which were while in Minnesota and another 79 during his first two seasons in Boston. 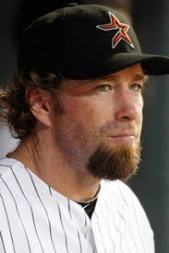 Bagwell was a pure slugger, launching over 40 home runs three times and hitting 39 in another three seasons during his career. What makes the first time he hit 39 home runs even more remarkable is that he did it in 1994 when Bagwell’s Astros had 47 of their games cancelled due to the strike. That season was among Bagwell’s best. Along with 39 home runs, Bagwell also scored 104 runs, drove in 116 RBI, all while batting .368 with an otherworldly .750 slugging percentage. Outside of that season, Bagwell scored over 100 runs 8 more times, drove in over 100 RBI 7 more times, and hit over .300 5 times. Bagwell also had rare speed for a first baseman, consistently stealing between 10-30 bases a year on his way to compiling 202 for his career.

Another player of consistency, Thome’s streak extended for 16 seasons 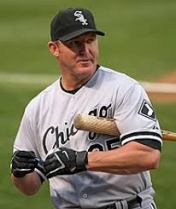 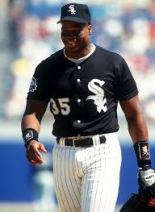 The Big Hurt wasn’t just a power hitter, but also had the ability to hit for average as well. He launched 40+ home runs 5 times in his career while also batting over .300 9 times with a league leading .347 in 1997. Though he won the MVP in 1993 and 1994, he had a third season just as deserving in 1996. In 1996, Thomas hit 40 homeruns and drove in 134 RBI while batting .349. Thomas always maintained the ability to get on-base as he had an OBP over .400 in 11 seasons, leading the leage in OBP 4 times. Thomas played just over half of his career as a DH, showing limitations in his fielding ability despite have a solid .991 career fielding percentage.

One of the better hitting first baseman of the last few decades, 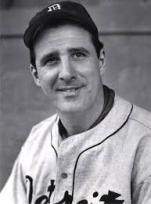 Greenberg had a shorter career than most others on this list due to retiring at the young age of 36 and missing 3 seasons to serve in World War II, but he made the most of the 8 full seasons he did play. His 6 full seasons prior to World War II are among the best of any first baseman in baseball history. During those 6 seasons he set marks that put him in the top 5 all time. He launched 58 home runs in 1938, then tied with Foxx for the most single season home runs hit by a ballplayer not named Babe Ruth. He smashed 63 doubles in 1934 which still stands as the 4th most all time. He drove in an astounding 184 RBI in 1937, placing him 3rd all time in that category. He also drove in 168 RBI in 1935 ranking 9th all time. All while posting a stat line of .329/.424/.645.

Though his production has slowed down in recent years, Pujols was

a monster during his first 11 seasons in the Majors. During that time he averaged 40 home runs, 121 RBI and 117 runs scored while maintaining a .328 average. Though he never cracked the 50 home run mark, Pujols has surpassed 40 homers 7 times. One downside to Pujols’ amazing career is that he holds the career record for Grounded Into Doubleplays. Despite leading the league in RBI just once, he has driven in over 100 RBI in 14 seasons, a record he currently shares with Arod. 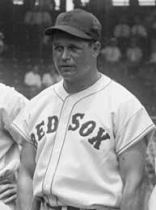 Jimmie Foxx had some of the greatest seasons for a 1st baseman of all time during his career. He is one of just two first basemen to win the triple crown. An accomplishment he achieved in 1933 with 48 home runs, 165 RBI and a .356 average. Amazingly that season was arguably his worst of his three MVP seasons. In 1938 Foxx put up a .349 average while blasting 50 home runs and driving in 175 RBI. But his most impressive season came in 1932 when he launched 58 home runs, drove in 169 RBI and posted a .364 average. Foxx played 14 full seasons during his career from 1928 through 1941. Such a well rounded hitter was Foxx that in those 15 seasons, he only failed to hit .300 three times, failed to hit .400 OBP twice, failed to slug over .600 five times and drive in over 100 RBI once. However, Foxx did have a downfall when it comes to plate discipline. Though he only struck out over 100 times twice in his career, he did lead the league in whiffs 7 times. 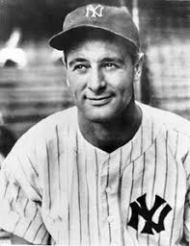 has had one of the most outstanding careers, not only for first baseman, but of all time. Since 1950 there has only been 10 instances in which a player drove in 147+ RBI. Lou Gehrig averaged 150 RBI per season during his incredible 12 year stretch from 1926 through 1937. Gehrig also averaged 141 runs scored during that 12 year stretch which again has only occurred 10 times since 1950. Gehrig was a 2x MVP but could easily be argued for at least 3 more. He won his first MVP award in 1927, the season Ruth hit 60 home runs, by hitting 47 home runs himself while driving in a league leading 173 RBI and batting .373. Gehrig’s .765 slugging percentage that season was also just .007 lower than Ruth that season despite a 13 home run difference. 1930 there were no MVP awards given, but Gehrig again drove in 173 RBI, hit 41 home runs and held a .379 average that season. In 1931, Gehrig lost the MVP race to Lefty Grove but had another incredible season as he led the league with 46 homers and 185 RBI. The RBI marks he posted in those 3 seasons are still ranked as the 2nd and 5th highest RBI totals of all time. The final season that Gehrig missed out on the MVP award was 1934 when surprisingly Gehrig was 5th in the MVP voting despite winning the Triple Crown that year with 49 homers, 166 RBI and a .363 average.

Be sure to check in tomorrow to see our take on 2nd Basemen.