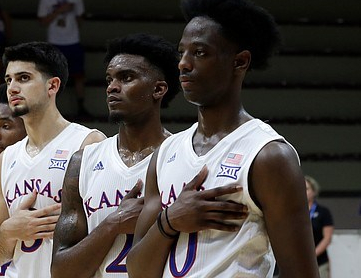 The Jayhawks have a DEEP team this year. They have so many different ways they can throw out a lineup. What we’re going to look at is what lineups the Jayhawks can and should use this coming season

First were just going to look at the projected starters and the entire roster and then break it down:

Bill Selfs untraditional turned traditional lineup. The Jayhawks had one of their best seasons ever in 2017 and a final four run in 2018 using a lineup like this. 1 big man surrounded by 4 guards. The Jayhawks will definitely use this lineup again this year but at a lower rate. The Jayhawks have a deep front court to go along with a deep backcourt and wings. But the Jayhawks will need buckets and this is the lineup to get you buckets. Every guy, 1-5 can launch the 3 at a decent to great rate. If the Jayhawks want to string points together, in a quick amount of time, this lineup is the go to.

Bill Self always uses the term “soft” when describing his team at a low point. Usually that means the Jayhawks are not producing on the defensive side of the ball. Not this lineup. No way. Each one of these guys can defend and defend multiple positions. This lineup gets after it. They have quick hands and are lengthy on the wing, they have big bodies down low. This lineup will produce steals, blocks and lots of boards.

Big on the Wings:

A completely different look for the Jayhawks. A look Self has really never used. A 2 guard, 3 big men lineup. Is Self going to use this lineup? I really believe so. And this could be the Jayhawks best lineup. If Dedric Lawson is hitting his outside shots, it’s lights out. They have two guards in Dotson/Moore and Grimes to control the pace of the offense, get up and down the floor and make outside shots. While, getting the bigs involved. Then you have the 2 bigs down low bodying people and getting boards left and right. Finally, you have Lawson on the outside with a complete mismatch for him to go to work offensively. This could be a great look for the Jayhawks.

A traditional 3 guard, 2 big man lineup but I like this look for the Jayhawks. But I like this look because of two guys: Devon Dotson and Sam Cunliffe. Devon Dotson has been at Kansas for a week now and Kurtis Townsend is already describing him as a “jet”. That means Dotson can get to the hoop and increase the tempo of the game. If Dotson can drive to the hoop, that opens up the 3 point line. Kick it out to the best shooters on the team and right now, I currently think that is Cunliffe. He didn’t get much action last year but he can let it fly. If Dotson can drive to the paint and Cunliffe knocks down some 3’s then the floor opens up. Cunliffe can drive and use his athleticism, the bigs then get freed up and then no one is even paying attention to Grimes over on the other wing. This lineup is a good one. But it relies on Dotson and Cunliffe.