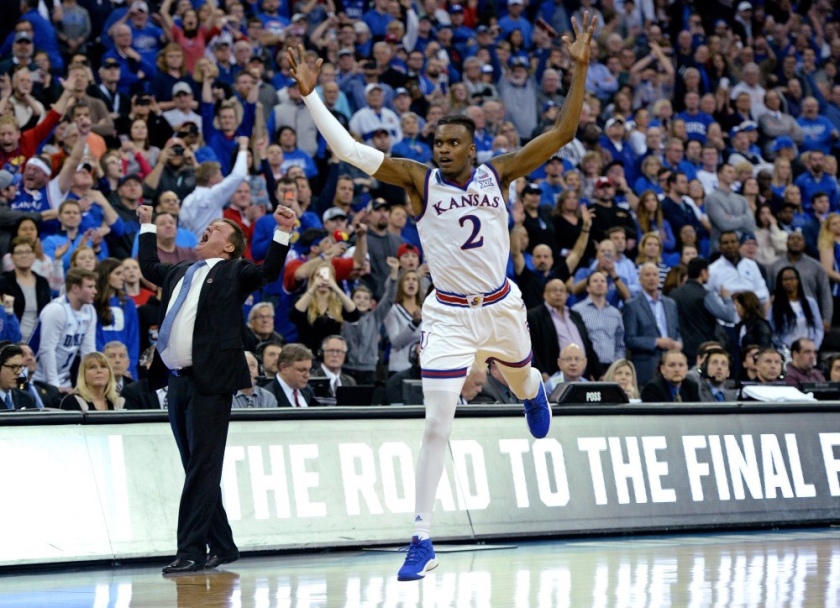 In a millionnnnnnn years I never thought that Lagerald Vick would return to Kansas after he declared for the draft. Sure, there was a possibility after he withdrew his name from the draft, but still, there were so many other options.

Vick could’ve bolted to the G league and made money, he could’ve transferred and went to another school or he could’ve made a lot of money oversees.

Lagerald Vick is returning to Kansas and this is exactly what Kansas needed. After breaking down their roster, there was one thing holding the Jayhawks back. Leadership and experience.

Well, you can cross that box off. Kansas has got that leadership and experience. Vick will immediately step into his starting role at the Small Forward position and fill a need for Kansas. After averaging over 12 ppg last season, while help leading Kansas to a Final Four run, Vick could be in for a big role this year as this is his team.

Kansas is deeeeeep next year. Like really deep. They have 13 scholarship players compared to the like 6 we had last year for the first half. It’s going to be interesting how Bill Self uses these lineups.

Brandon Rush situation: I’m not saying Vick is B Rush but remember when Rush had to withdraw his name from the 2007 draft because he tore his meniscus. Well, Rush has to return to KU and led them to a title. Without Rush tearing his meniscus, Kansas is still looking for their first title since 88. With Vick having to withdraw his name and bringing leadership and experience, like Rush did, to a really solid team, hmmmmm. It makes you think.

*PS: I always knew Bill Self had a soft spot for Lagerald*

And make sure you listen to Chalking Hawks, the Kansas Basketball podcast. Talking all things Kansas Hoops. (Twitter: @ChalkinHawks)