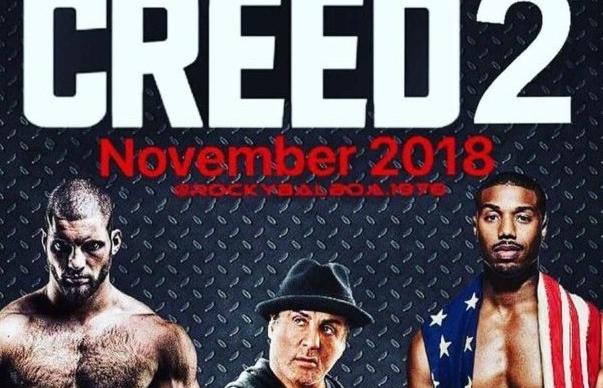 What a day. I mean what a freaking day. Listen, I am one of the biggest Rocky/Creed fans in this world. Everything about these movies are pure gold. You can’t walk away from a Rocky movie and NOT be fired up.

Well, it was just a normal Wednesday for me. Just lounging around, not doing much and BAM! Day instantly turns around. Out of left damn field, I get a text from Mike, fellow Wingspan member, saying the Creed II trailer just dropped. And I know they just announced the date of the movie the other day, to think they were going to drop a trailer this early after the release date? I thought Mike was fucking with me.

And then, I saw it with my own eyes and Oh my god, I have never seen a better trailer.

Is that not a top 5 trailer you have ever seen. This movie has blockbuster all over it. Michael B. Jordan is going to have the same feeling Vinny Chase had when Aquaman blew past Spidey.

I have never been more hyped for a movie. This movie is going to make Michael B. Jordan’s career.

Forget the talk about who’s the GOAT; LeBron James or Michael Jordan. The only time Michael Jordan and the word GOAT can come into play is if there is a B between the M and the J. Case closed.

Breaking down the trailer:

Second, there are so many questions. One, why is Adonis in the hospital all beaten? Is that from a title fight? Did he get into an accident? Is he dying?!?!

Third, how far ahead are we into the future from Creed I to Creed II? Is Adonis already the champion of the world? Are they not going to follow the same path Rocky I and Rocky II took. Obviously, Adonis can’t fight “Pretty” Ricky Conlan again because he’s in jail for being a fraud. So that will be different than Rocky vs Apollo. Already a big plus for us fans. And for all of you who thought that they were going to follow the sequences of the Rocky movies, well you can shove it.

So, how is it starting? Adonis champion of the world? Is he still going after that title? What’s the deal here?

Fourth, Adonis is a father now?!?! I mean the guy is holding up a baby and the way him and Bianca were at the end of Creed I, you’d think the relationship is solid. So that also makes me believe we fast forward a decent amount of time.

The whole plot of the trailer goes into detail on Rocky telling Adonis he can’t fight this fight. The man he is fighting, were ASSUMING, is too powerful and to strong for him. And then we get a glimpse a freaking glimpse of who he’s fighting!!

Chills, freaking chills down my spine.

Adonis Creed vs the son of Ivan Drago. A chance for Adonis to redeem his father’s death?!?!