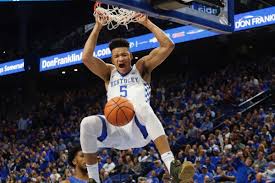 The South Region, led off by #1 overall seed Virginia, may be the most top heavy region in the tournament this year. While the Midwest Region boasts perennial powers Kansas, Duke, and Michigan State, the South Region features several teams with very real Final Four chances. With few chances for big upsets in the South, the top seeds should see plenty of action facing off against one another on the quest for a national championship.

The top five seeds in the South Region each have legitimate Final Four chances, beginning with top seeds Virginia and Cincinnati. The Cavaliers and Bearcats win in similar ways as the squads look to completely shut down opposing offenses while having enough shotmakers to keep the offense afloat. Should these two programs meet in the Elite Eight for a chance to advance to the Final Four the over/under for the game might be less than 80. That’s right, we could be looking at a 41-38 dogfight should these defensive juggernauts meet at the top of the South Region.

Tennessee, Kentucky, and the Wildcats of Arizona are still not to be forgotten in the South. Arizona has the best player in the country in DeAndre Ayton and has plenty of motivation to go on a deep run given off-court issues plaguing the program all season long. If anyone can turn all of the negatives swirling around the program into the extra fuel for a lengthy stay at the Dance, it’s Arizona head coach Sean Miller. How long the Cats last in the Big Dance will revolve largely around the play of junior guard Allonzo Trier, the team’s second leading scorer and veteran presence. Ayton is good enough to ensure the Cats won’t be upset in the first round all by himself. Anything further, and the freshman phenom will need Trier to help keep defenses from keying on him alone.

Tennessee and Kentucky are intriguing teams here for almost completely opposite reasons. The Vols don’t have the big name recruits across the board their conference rivals have, but the consistency of the Vols play all season long prove the 3 seed will not be a team to beat themselves. Similar to both Virginia and Cincinnati, the Vols are also a great defensive team. Kentucky, on the other hand, was up and down for most of the season but as always is peaking at the right time. The Cats of UK have tons of talent and have developed into a team with an offense built around attacking the rim. This style should serve Kentucky well if the team can keep from being upset by tricky 12 seed Davidson. The attacking style Kentucky plays with could land a player like Ayton in foul trouble or take the game out of the hands of a defense like Virginia’s by getting to the line.

Despite the top heavy nature of the South Region there are still some bracket busters to watch out for. Similar to Tennessee, 11 seed Loyola of Chicago is a squad that does not beat itself. The LU Wolves should have no problem edging 6 seed Miami on their way to a showdown with the Vols in the second round in a match up that will pit two of the most consistent teams in the country against one another. Worth noting here is that Loyola is an even better defensive team than the Vols are, granted having played lesser competition than the Vols faced in the SEC. While the Vols would still be the favorite in the match up regardless of the Miami-Loyola winner, Tennessee would have a much easier time holding off the Hurricanes than facing a dangerous 11 seed in Loyola.

To the credit of both 13 seed Buffalo and 12 seed Davidson, I find both to be great sleeper teams. The only issue is, I believe both teams got very unlucky draws. A hot Kentucky team loaded with Calipari’s high end recruits is probably closer to a 3 seed. The inconsistency of the Wildcat youth early in the year is the main reason for the team slipping even to the 5 line. Buffalo, too, is matched up against an underseeded Arizona squad. Arizona could easily be a 2 seed if not for the horrendous roller coaster of the court that transpired this season. Many believe Sean Miller and the Cats were underseeded as a sort of punishment for the numerous scandals, and I tend to agree with that.

Of course, now, I have to make my prediction for the South Region. I believe Kentucky is very quietly the team with the best chance to break out of the South. The Cats are being overlooked a bit due to the presence of the #1 overall seed and the nation’s best player in the region. Coach Calipari is a wizard who thrives in situations such as this. He’ll have Kentucky ready to go regardless of the opponent. Also, as I mentioned the offensive style developed by the young Wildcats squad favors a deep run. The biggest X-factor for Kentucky will be how much outside shooting freshman swingman Kevin Knox can provide. If Knox and company can space the floor some on top of the aggressive attacking at the rim even the best defenses in the country will have problems.