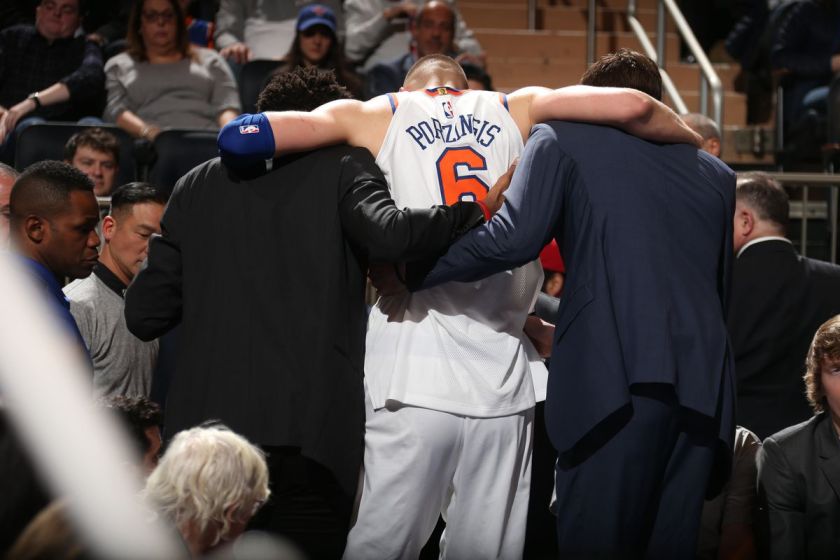 It wasn’t just a living nightmare for Knicks fans, it was the perfect symbol to show what life for the New York Knicks has been since the turn of the century.

A stunned silence overcame the Garden crowd as Porzingis came crashing down to the ground at the 8:46 mark remaining in the second quarter. Immediately, everyone knew their worst fears may have become a reality.

Porzingis, who was selected to participate in his first All-Star game later this month, started to punch the hardwood floor as he went to grab his left knee. Trainers and teammates rushed to check on their star. Fans couldn’t look away and the face on Porzingis was a clear tell-all that the injury was worse than it looked.

Just like that, the Knicks season vanished in thin air. What started out as a season full of promise and hope that the Knicks may have finally moved on from the Carmelo Anthony – Phil Jackson era that plagued the team for the past three seasons came to a screeching halt. Any optimism that the Knicks were headed in the right direction ended Tuesday night.

With the MRI confirming a left ACL tear, Porzingis will now be out for the next 9-12 months. He’ll miss a vast majority of the next season which means the Knicks rebuild just became extended by a year. Who knows even if Porzingis will return to the same form he was projected to be on. Porzingis had top-five player in the league potential one day and now it’s an uncertainty.

An optimist may look at this as a blessing in disguise. You can argue that the Knicks needed to blow it up regardless and needed to be playing for 2-3 years down the road. The issue is the Knicks are currently slated to pick 10th in the draft. Porzingis already may have won them too many games to tank for a top five pick. Teams like the Grizzlies, Hawks, Magic, Mavericks, Kings, Bulls and Suns may be so bad it might be impossible for the Knicks to even get to the top seven. The draft is so deep, the closer you can get to the first pick, the better.

Porzingis is still only 22 years of age. By the time he’s fully recovered, he’ll only be 24. His whole career is still ahead of him.

The Knicks can capitalize on this by simply tanking. Take a page out of the Spurs playbook when David Robinson went down and tanked for Tim Duncan. Look at how Sam Hinkie built the 76ers. This is model the Knicks need to approach until KP is fully healed.

There’s no choice but to sell and sell everyone. At 23-32 and well out of the playoff picture, there’s no need to keep anyone on the roster over 25. Players such as Courtney Lee, Lance Thomas, Kyle O’Quinn, Jarrett Jack, Joakim Noah and even Enes Kanter should all moved by Thursday’s deadline.

The Knicks do have value on the roster for contenders to acquire a late first round or early second pick in this draft. This should be Scott Perry’s only objective by the deadline. The Knicks need to accomplish this.

The Knicks need to stockpile on young players and draft picks to find that next diamond in the rough. They need to give themselves a chance moving forward. Trading for young players, draft picks, and expiring contracts are should be priority one, two and three.

Prayers to Porzingis. Wishing for all the best in his recovery. Injuries are just simply awful for the NBA and its fans.