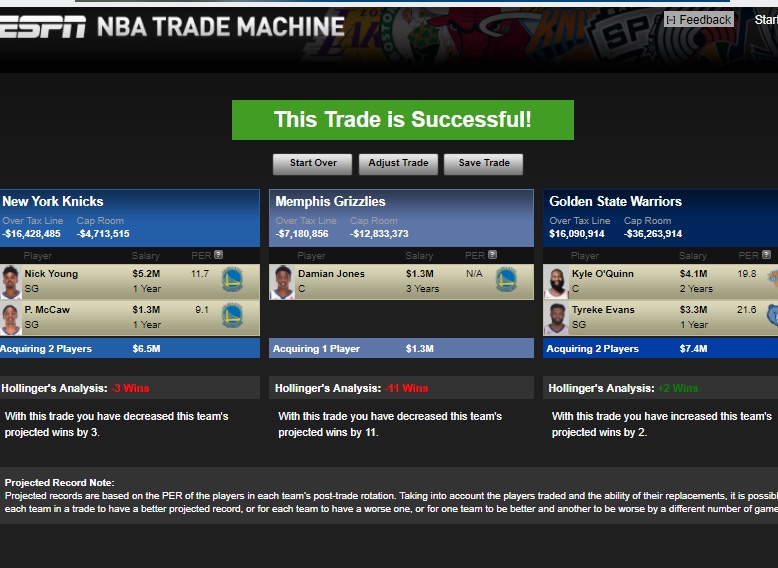 This trade only makes the Warriors superteam that much better. The bench would see a serious upgrade with Evans running the second unit and Kyle O’Quinn can be a starter over Zaza Pachulia.

O’Quinn is a strong rebounder, good shot blocker, a solid rim protector, and a good passer in a free flowing offense. In just 17 minutes of game action, O’Quinn is averaging 6.9 points, six rebounds, 2.0 assists, and a one block a night.

Tyreke Evans is having a career season and is setting himself up for a nice paycheck come free agency. Memphis should get more in return for a player of Evans’ caliber, but Evans is a rental and Memphis is in salary-cap hell. It’s unlikely they’ll be able to retain Evans due to paying Conley, Parsons, and Gasol all $20 million plus a year.

Taking the best available offer should be the first priority for Memphis. Damian Jones is a former Vanderbilt player and should feel more comfortable playing in the same state as his college ball. The former 30th overall pick in the 2016 draft has been bouncing around the G-League during his stint with the Warriors.

The 2018 first round pick will allow the Grizzlies to try and find a diamond in the rough with their current salary cap situation. Memphis should try to get the best possible talent for the least amount of money possible.

The Knicks take on Nick Young’s expiring contract and add Patrick McCaw. McCaw has been a decent reserve for Golden State, although his shooting from three has dropped to 25.4% compared to 33.3% his rookie year. The Knicks will be happy to continue their rebuild and take a chance on McCaw’s potential.