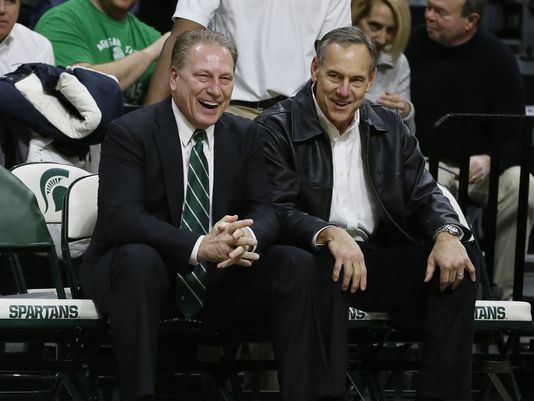 But an Outside the Lines investigation has found a pattern of widespread denial, inaction and information suppression of such allegations by officials ranging from campus police to the Spartan athletic department, whose top leader, Mark Hollis, announced his retirement on Friday. The actions go well beyond the highly publicized case of former MSU athletic physician Larry Nassar.

Over the past three years, MSU has three times fought in court — unsuccessfully — to withhold names of athletes in campus police records. The school has also deleted so much information from some incident reports that they were nearly unreadable. In circumstances in which administrators have commissioned internal examinations to review how they have handled certain sexual violence complaints, officials have been selective in releasing information publicly. In one case, a university-hired outside investigator claimed to have not even generated a written report at the conclusion of his work. And attorneys who have represented accusers and the accused agree on this: University officials have not always been transparent, and often put the school’s reputation above the need to give fair treatment to those reporting sexual violence and to the alleged perpetrators.

Even MSU’s most-recognizable figures, football coach Mark Dantonio and basketball coach Tom Izzo, have had incidents involving their programs, Outside the Lines has found. (Via ESPN.com)

Things in East Lansing are just getting worse and worse. Every day that goes by, we get another story on what is going on from this dirty, horrific, malicious act that put Larry Nasser behind bars for 175 years.

It all started with Larry Nassar, the team doctor for Michigan State and USA Gymnastic teams. Nassar sexually abused about 160 women during his time as a “doctor”. I can tell you this much, there is an assigned seat in hell for this man. I know people out there want Nassar dead, and that’s fair. I’m not the one who is going to argue that, but his day is coming. Just think of this for a second: for the rest of his life, he is going to be in a jail, behind bars, until he dies a not-so-peaceful death in his jail cell. I’m sure he’s going to be the one getting abused in jail, so he gets a taste of his own damn medicine. That is better than just killing him. Every single day, for the rest of his miserable life, he is going to be abused, tortured, and must think about all the mistakes he made to get into the position he’s in now. Personally, I think this man needs to suffer.

For the most part, the entire case was focused on his time as the USA Gymnastics coach. The girls he abused there now have reports coming out about his time at Michigan State. Even though they are just allegations (for now), things are not looking good in Spartan Country. I understand that they are just allegations, but if you’re connected to this guy in any way, shape, or form, it’s probably not good for you.

And yes, they are allegations, but it’s not looking good for Tom Izzo or Mike Dantonio either. 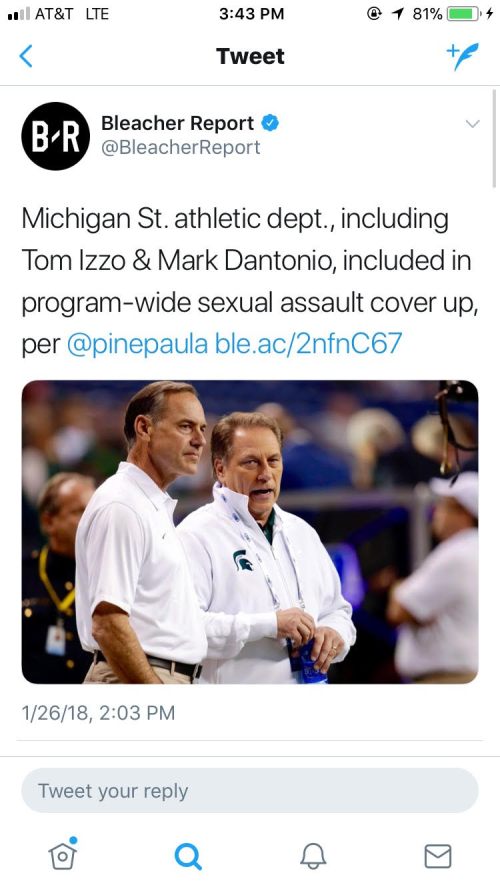 These are all allegations for now, but if this is true, Izzo and Dantonio are in loads of trouble. It’s not even the fact that they’ll lose their jobs, it’s that if they knew about all of this going on at Michigan State—or them knowing that women were being abused in any way by Nassar and other men alike—and didn’t say anything, then they should be ashamed. Again, allegations for now, but if it is true, what type of man are you that you knew women were being abused and you just turned your head because you’re scared your precious school will get in trouble? Grow a set of balls and stand up for these girls who don’t have a say, that are being abused and can’t do anything about it. I don’t understand these guys if this is true. First of all, are you that concerned about a basketball or football team more than a poor girl’s life? Secondly, the fact that you turned your head and did nothing about it to “save” your program, do you think that no one is going to find out in the future? You may be able to buy yourself a few years, but when it all comes crashing down, and it always does, it is sure as hell a lot worse now than if you just spoke up the first time.

And you know what really gets under my skin and REALLY bothers me. If this is true with Izzo and Dantonio, they BOTH have daughters. God forbid, but what if this happened to their daughter? I sure hope they wouldn’t turn their heads then. But if it’s someone else’s daughter it’s fine to these two guys? Shameful. These girls are still SOMEONE’S daughter and to turn your head on this? There are no words. Again, these are all allegations, but if this is true, Izzo and Dantonio should just not have jobs anymore; they should never be spoken of again.

It’s time to stand up for the people who don’t have a voice. Time to not turn our heads. Time to start standing up for people who are hurting. If this doesn’t wake some people up, nothing will. There is no place in this country for the abuse of women, and if you see it, do something about it and stop it.