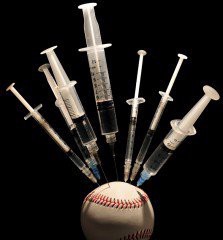 The Steroid discussion has been going on for years as to what to do with guys who have used or have been accused of using when it comes to Hall of Fame voting and stats. With the Hall of Fame induction tonight I would like to give my opinion on the topic. As a fan of baseball who is 31 years old, the steroid era has been a huge part of my baseball life.  As a former player I can see the reasons why guys would do steroids and honestly, I have a hard time blaming them. This has been a hot issue for years and this is my opinion on it.

Some people ask why would a player even consider doing steroids. We all know they are illegal and it does cheat the game. Anyone asking themselves how a player could even go down this road in the first place has to ask themselves this question. Take whatever way you make a living, whether it be police officer, doctor, lawyer, construction worker, school teacher, etc. What if I told you I have a substance you can take that will do three things for you? Number one: it will insure you are employed.  Number two: it will give you the ability to earn up to 25 times the amount of money you are making right now. Number three: you will be the top performer in your field gaining national attention for your excellence. So, let’s say you make $60,000 a year currently and by taking this substance you can now earn one-point-five million a year and not lose your job.  The downside is if anyone found out you took this substance, which is not guaranteed, you will be suspended from your position. You will not lose your future salary, also your coworkers might be upset with you. It’s possibly not the best thing for your health. There is the potential no one ever finds out and your health is fine. Thinking about the pros and cons in your own professional life should give you a pretty clear picture as to why so many players went down this path.  Not saying it’s right, but the benefits would be pretty hard to turn down for most people.

The way I look at the steroid era is the numbers that were put up should be looked as discounted for sure. Barry Bonds hitting 73 home runs and Sammy Sosa hitting 60 plus home runs multiple seasons and Mark McGwire hitting 70 are absurd feats. I don’t feel any player would have reached those numbers without performance enhancing drugs. However, the numbers do need to be respected based off the fact both hitters and pitchers were doing steroids. To me, this almost balanced out the advantage a hitter would have over a pitcher or vice versa. A pitcher taking PEDs has added velocity, making him tougher to hit as well as staying healthier over the course of a year. In theory, the pitchers would have their best stuff more often making the hitters job more difficult. To balance this out, the hitters taking PEDs were adding strength which allowed them to have more bat speed to catch up to the added velocity, as well as hit the ball harder and further when contact was made. This theory would not make sense if you believe only a handful of guys were using PEDs at the time and the guys who did steroids were beating up on players who were clean. Take it for what it’s worth, but Jose Canseco estimated 85% of players were using some form of PEDs during the steroid era. Say what you want about Jose Canseco, but he was spot on with many things he revealed about steroids in baseball. So, if his estimate is even close to right, to me the playing field was pretty balanced when it came to hitter vs pitcher. How would we feel if every one of the 73 home runs Barry Bonds hit was off a pitcher who was also on steroids? This is why the numbers and accomplishments from this era should be respected, because both hitters and pitchers were using, so the league leaders on both sides—MVPs and All-Stars—earned it at the time.  Historically, I would not compare the numbers in terms of all-time records simply because the ability to hit the ball harder and further boosted the offensive stats to absurd levels. The ability to stay healthy and at the top of your game for entire seasons really contributed to the guys’ overall career numbers.

I know the main argument against my theory of an even playing field is that we don’t know who was using and not using at that time. I understand this argument, but I must say with all the facts we have seen over the years I think I will lean toward the use of PEDs being the majority of the MLB and not the minority. I do feel bad for the guys who were in the minority and not using at the time, who either lost their jobs or put up respectable numbers against juiced pitchers or hitters and are underrated. If you hit 30 homes runs clean or had an era under 3.50 in that era, that would be a hell of a season. A guy can say, “Hey, that was me. I did it clean during that era.” Unfortunately, we don’t know who to believe.

What to do in terms of the Hall of Fame and guys who have used? The number one problem is we don’t know who used and who didn’t. This creates confusion and guys get blamed and others don’t get blamed at all, but actually used and they got in.  My solution to this problem is two-fold. The first is we must isolate the years of the Steroid era. The era needs to be dated—for instance, let’s say from 1997-2010. The reason for this is so that the numbers do not get mixed up with other eras and compared. Make the Steroid era stand alone and, as I said, I would discount any stats put up during this window in terms of career numbers. After we have isolated the time frame, I would compare the numbers players put up against other players numbers from the era. By comparing stats from the era against each other we can then decide if the players are Hall of Fame worthy. By not comparing the numbers to other eras and only comparing numbers put up in the steroid era, you can see which seasons they were actually Hall of Fame worthy. If a guy hit 41 home runs and drove in 115 RBIs in any other era, that season would be viewed as a Hall of Fame season and go toward their candidacy. In the Steroid Era with guys hitting 60 plus home runs and driving in 140 that same season, they would look more average than Hall of Fame worthy.  I would put in the top performers from the Steroid Era such as Barry Bonds and Roger Clemens, but I would leave out a guy like Gary Sheffield because his seasons in this era were impressive if you look at it compared to all-time. For the era it was not nearly as impressive. Any Hall of Fame seasons put up by players before the designated steroid era or after can be looked at comparably to any other era. A guy who only played in the Steroid Era or only had big years in the Steroid Era needs to have been at the top of the league in multiple categories year after year to get my consideration.

As a research project I’m going to set my own Steroid Era period and analyze the numbers of guys and set my criteria of what a Hall of Fame worthy season looks like in that era. From that I will pick the guys who I would put in the Hall of Fame and we can debate it from there. Stay tuned….