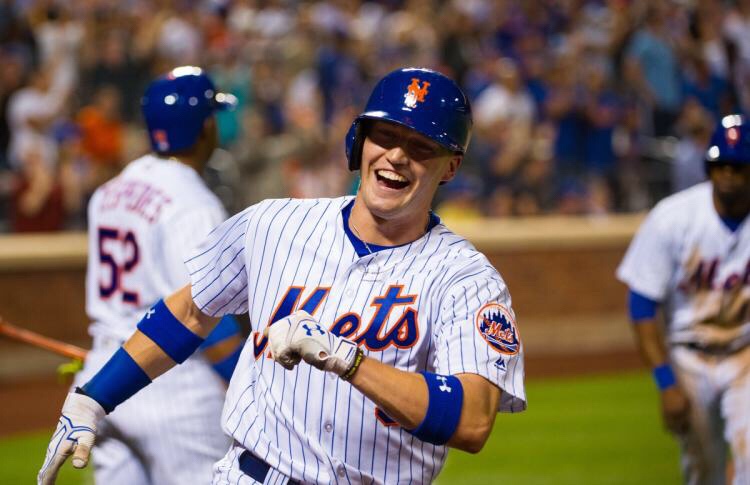 Brandon Nimmo has always been on Mets fans radar after he was the 13th overall pick in the 2011 MLB draft.  He is from Wyoming where they did not have a High School baseball team to play on so right off the bat it was somewhat of a polarizing pick.  What made it worse for Nimmo was the late great Jose Fernandez was chosen 14th overall in the 2011 draft.  Nimmo never dominated in the minors at any level and was hurt a few times along the way, so he did not have a meteoric rise through the system.  Immediately people labeled him as a bust, which to me was not fair just yet.  Now Brandon Nimmo after having a small sample size of success last season comes up in every Met fans discussion for the last week.  Reason for this is the fact the Mets announced Michael Conforto will not be ready until May, which will give Nimmo playing time early in the season.  Also, it was reported that the Mets turned down acquiring Andrew McCutchen from the Pirates because they did not want to part ways with Nimmo.  After McCutchen was traded to the Giants the Pirates have now turned their attention to trading Josh Harrison. The Pirates again want Brandon Nimmo but the Mets are not budging.  Is this posturing by the Mets or have they seen enough from Nimmo to warrant holding him long-term?

Nimmo as a player…

Brandon Nimmo on the field brings a few things that I can see teams falling in love with.  Number one he is a blue-collar guy, who plays hard everyday and has fun doing it.  His constant smiling and dirty uniform tells the story of how he feels about this game.  Every organization wants guys who love the game and respect it so that is a plus.  The other thing teams like about Nimmo is the fact he gives you a good at bat every time.  He has a great command of the strike zone and rarely gets himself out.  We are in a swing and miss day and age so guys like Nimmo who can work a count and get the bat on the ball are valuable.  His professional approach at the plate led to him having a .379 on base percentage last season.  A player like Nimmo can bat leadoff or second in a lineup and really set the table for the middle of your lineup.  Table setting players are not as popular as big power or speed guys but they are important to any winning team.  Speaking of power, it is fair to expect Brandon Nimmo will add more power to his game. As he develops I believe he will learn the pitches he can drive and be more aggressive with them when he gets them.  He is a big kid at 6’3 210lbs and when he did get a hold of the ball for a home run they were not cheap.  He ended up with 11 doubles 5 Hrs and 1 triple in 69 games last season to go along with his ability to draw walks and get on base.  The other thing with Nimmo is he can play all three outfield positions so he offers versatility to a team.  He is not a elite defender at any outfield spot but he is not going to hurt you out there.  These attributes led to Brandon Nimmo having a positive 0.9 WAR last season.

The problem with Brandon Nimmo is that his upside is not extremely high.  He is more of a high floor player as opposed to a high ceiling player.  He will add more power but is never going to be a 30 plus home run a season player.  He probably is never going to be a guy who hits over .300 and is not likely to be a big base stealer.  Nimmo is also not an elite defensive outfielder at any spot.  If Nimmo played second base with his offensive profile he would be an All Star caliber player.  If Nimmo was an elite defensive outfielder he would be an upper echelon player on most teams.  Unfortunately, he is not a second baseman or elite defensive outfielder. With his lack of overall power and speed it hurts his short-term and long-term value.  Nimmo is what he is and you are looking at a fourth outfielder short-term, with starter potential in the long-term.

Where does Nimmo fit in for the Mets ?

Short term he is going to be splitting playing time with Juan Lagares in center field until Michael Conforto is healthy if he remains with the Mets.  After Conforto is back, Nimmo really does not have a place on this team besides as a fifth outfielder.  The Mets already have Jay Bruce, Yoenis Cespedes, and Michael Conforto penciled in as starters when healthy. The Mets also have Juan Lagares who is a right-handed bat and elite defender so he figures to be the main backup off the bench. Looking toward the future, the Mets have all their outfielders locked up for at least the next three seasons so there is not really an opening for Nimmo to play unless an injury or trade occurs.  I like Brandon Nimmo but due to playing time and his low ceiling, I would be moving him in a trade to improve another area of the team.  I agreed with not trading him for Andrew McCutchen.  Andrew McCutchen would have been a flashy move but reality is he can’t play center field anymore. Knowing that fact, I would rather have Jay Bruce in right field at 13 million a season for the next 3 seasons and not have to give up any prospects. The other problem with Andrew McCutchen is he is a free agent at the end of this season.  I would however package Nimmo for Josh Harrison as he makes sense for the Mets both short and long-term.  He has 3 years of control left with the last 2 years being team options.  Josh Harrison also plays a position of need for the Mets in Second base and is a strong defender.  He also has the ability to play third and both corner outfield spots so he is versatile which is very important in todays game especially in the National League.  Not only is Josh Harrison a strong defender his offensive game is what the Mets Lineup lacks.    They desperately need to add a top of the order bat with some speed.  A potential Josh Harrison and Amed Rosario middle infield would be dynamic in the field and could potentially be the athletic top of the order table setters this team has lacked for years.  I think the Mets initial refusal to move Brandon Nimmo for Josh Harrison is their way of boosting Nimmo’s trade value potentially to other teams as well as lowering the Pirate’s demands when it comes to the other players they may want in the trade to go with Nimmo.  I would doubt the Pirates would only want Brandon Nimmo for Josh Harrison so this may be a smart strategy.  I trust Sandy in trades as he normally gets good value for his guys so I am confident.  Long story short is Nimmo is a nice player and has value but in this world sometimes you have to give up something to get something better.