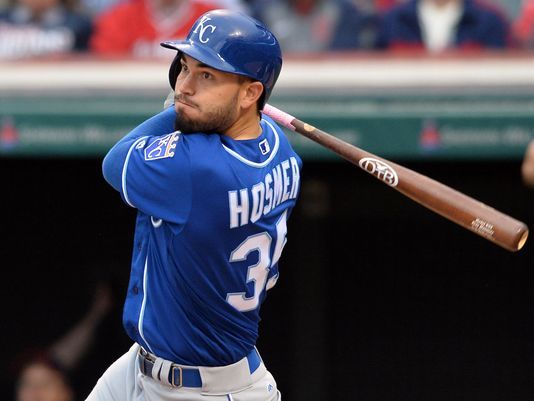 Eric Hosmer is the best free agent on the market this winter. What’s odd however, has been the lack of interest displayed in the 28 year old– World Series Champion.

As it stands, Hosmer has only two offers on the table. A seven year $140 million deal from the San Diego Padres and a seven year $147 deal from the Kansas City Royals. Bob Nightengale of USA Today was first to break the reports of the potential deals.

There’s been no indication yet on where Hosmer might be leaning but it could be assumed that since he’s a Scott Boras client, Hosmer is holding out for an 8 year deal.

Hosmer is a perennial talent having played in two World Series, an All Star, a Silver Slugger and a four time Gold Glove winner. There should be a much larger market for his services but it’s been awfully quiet.

Over the last three seasons, Hosmer’s appeared in in 478 of 486 possible games. In that time, he’s averaged 177 hits, 92 runs scored, 23 home runs, 97 RBI, 29 doubles, a .294 batting average to go along with a .359 on base percentage on a per season basis. Add in the gold glove defense and that seems to be a player that a majority of MLB teams should want.

Kansas City Royals – The only team Hosmer has ever know. A place where he’s a franchise icon and would without a doubt have his number retired a Royal if he spent the rest of his career in the Royal Blue. The problem with the Royals? They are in a clear rebuild and won’t have the money to resign Mike Moustakas or Lorenzo Cain. The seven year $147 million dollar deal would be a record setting deal for the Royals franchise. If Hosmer does indeed go back to Kansas City, he’ll be betting on the front office to build a contender around him again.

San Diego Padres – The Padres have not made the playoffs since the 2006 season. They’ve been a rebuild ever since. The Padres play in one of baseball’s toughest divisions as the Dodgers represented the National league in this year’s World Series and the Rockies and Diamondbacks both were the Wild Card teams. The San Francisco Giants have already added Evan Longoria to help themselves compete against the West’s best. Hosmer would be joining a last place team and would be relying on Austin Hedges, Wil Myers, Hunter Renfroe and Manuel Margot to be a lot better players than they have shown this year. It’s hard to imagine Hosmer going out to San Diego unless the Padres want to add that extra year to the deal. Even then, Hosmer would be choosing money over loyalty and he does not seem to come across as that type of guy.