For one game he will be.

The Giants announced Wednesday they have suspended the troubled cornerback for the last game of the season for “a pattern of behavior that is conduct detrimental to the team,” interim GM Kevin Abrams said in a statement.

The safety Collins called Apple a “cancer” to the team Tuesday, saying the Giants should lose him in the offseason. The two have feuded over the past few weeks during what has become a disastrous season for the Giants and Apple. Collins apologized to Apple on Wednesday.

Apple declined talking to reporters after Wednesday’s practice, only offering that he has “to take a s–t” before walking out.”

Good, get this loser out of here. I am so sick and tired of this child making headlines for all the wrong reasons. Eli Apple is a childish, immature, waste of talent loser and I want him off the New York Giants football team soooooooo bad.

And if anyone disagrees with me, you’re a got damn moron.

Think about it for a second, when the Giants were winning Superbowls, they were led by Eli Manning, Brandon Jacobs, Justin Tuck, Antrell Rolle, Osi, Strahan, guys who wore their hears on their sleeves and would legitimately DIE for Big Blue. Eli Apple could care less about the Giants and he’s just along for the ride. It’s all about “me, me, me” with this guy and it is sickening.

If he was good at football, I would actually bite my tongue because he is helping us win football games. I would hate it because he’s still a bad teammates, but IF he were good, I would be whatever, Giants are winning. But were a 2 and freaking 13 and this season has been a complete disaster. The lone bright spot, really, is Landon Collins, who is turning into a leader for the Giants and already is a BEAST. LC is turning into the type of players like the guys mentioned before, someone who understands to play for the NYG and wearing that logo with pride.

Eli Apple doesn’t understand that. And if LC is calling you out and wants you out, then so do I.

I once asked Brandon Jacobs, over twitter after he retired, if he would play ONE game with the Dallas Cowboys for $10 million and he responded with a very simple, “no”. You know why, because he HATES the Dallas Cowboys, as any Giant or Giant fan would. That is being a good New York Giant. 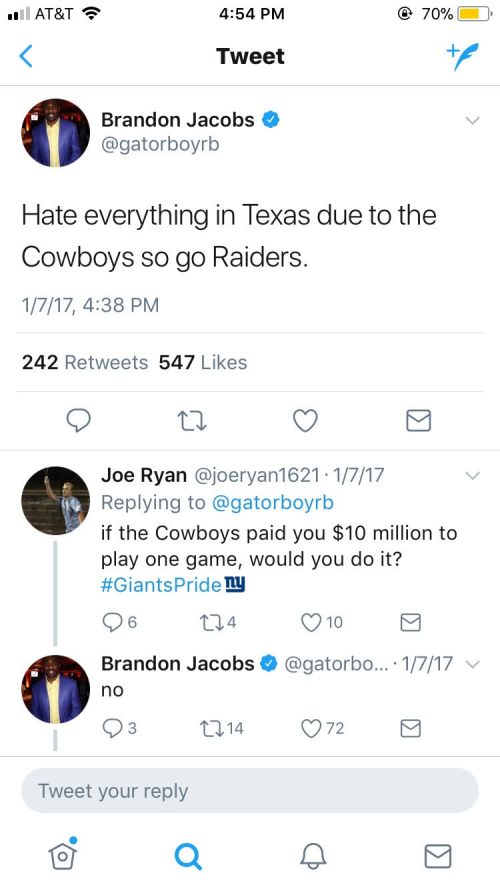 But instead, Eli Apple is a healthy scratch from a game because he sucks, and is retweeting and liking tweets of his friends from Ohio State, who plays for the Cowboys now, scoring a touchdown against the Giants, during the game!!!!!!!!!!!

What an absolute loser and get the fuckkkkkkkkkkkkk off my team. We don’t need you anymore, you suck anyway and all you care about is Ohio State. You should’ve never left their in the first place if you loved it so much.