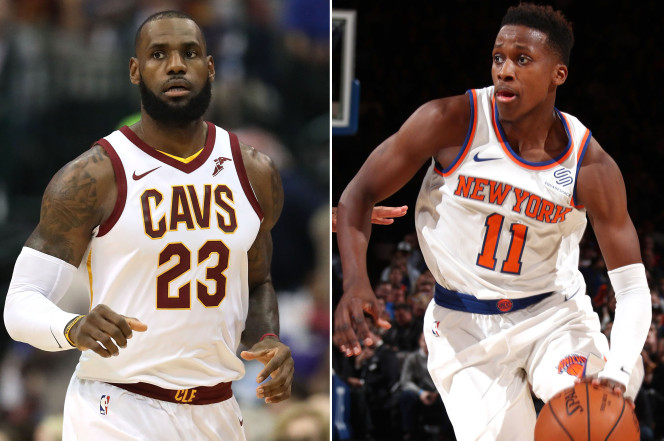 So, the other night, LeBron James made some decently big headlines after the Cavs game with the Mavericks. A reporter asked LeBron about Dennis Smith Jr’s game, a kid who LeBron has mentored for a long time. Without hesitating LeBron said this:

First of all, how bizarre is it that LeBron is even mentioning the Knicks. The question had nothing to do with the Knicks. I mean, LeBron is a free agent at the end of the year, maybe he sees KP dropping 30 a game and he has New York on his mind???!? Crazier things have happened.

Dennis Smith Jr is a good basketball player. He is athletic, he can get to the rim, he’ll be a solid NBA player. I’m not arguing that. But he is not Frank Ntilikina. Dennis Smith Jr. does not fit this New York Knicks team. Dennis Smith Jr. is a “me” guy first and then he gets his teammates involved. He does not do a good job with the flow of an offense or allowing the game come to him. Smith doe not adjust well to other types of tempo’s and only plays at one pace.

If Dennis Smith Jr. was such a winning player and good player, how come he couldn’t get a talented NC State team into a wide open NCAA Tournament. Before the season they could’ve been as high as a 5 seed in the tournament. Smith even got to NC State a year early to learn the offense to get ready for his lone year at NC State. I understand he put up good number for the Wolfpacks, but good stats don’t add up to wins. NC State had a lot of problems last year, their coach got fired, they were losing close games, but when things went bad, Smith couldn’t step up and help his team out. He wasn’t leading that team and putting them on his back. A season full of high expectations ended up leading to no postseason play.

Meanwhile, Frank Ntilikina is playing a pivotal role in the best European league and helping his squad to the finals at the young age of 18 years old. A kid playing against grown men, who are very good basketball players, and helping your team to the finals? Yeah, I’ll take that player over  a person who couldn’t lead a team to the postseason.

Fast forward to this season, obviously Frank is a Knick and Smith Jr. is on the Mavericks. Yeah, Smith is averaging 15/4/5 in 30 minutes but his team is 2-11. And the Mavericks actually have a decently talented lineup. I wouldn’t say the Knicks are so much more talented than the Mavericks. But does that sound familiar? Good stats on a bad team. Same thing at NC State. Good offensive stats don’t win games because Smith Jr. is liability on defense. It’s good and great when you’re averaging 15 a game but when the opposing Point Guard is averaging over 20 ppg on you, the 15 a game means nothing anymore.

Meanwhile, Ntilikina is averaging 4 ppg, 5 assists per game, 2 rebounds per game and 2 steals a game in 20 minutes. Ntilikina does everything on the floor well and he clamps down on defense. Ntilikina is already an emerging star on defense as even the best players in the league can’t shake him.

And guess what? Who in the world would expect the Knicks to be 7-5 in their first 12 games? I’m not saying Ntilikina is the main reason for that, but he is a big reason for it. It is not a mistake that the Knicks are thriving on defense and it is no mistake KP is averaging 30 ppg.

Ntilikina is the type of guard that can score when he needs to but it’s not his game. His game is his insane passing skills and his defense. Ntilikina has no problem deferring to KP and the shooting wings and then getting back on defense to get the Knicks extra possessions.

Dennis Smith Jr. cannot do that at this moment in time.

Listen, the Knicks already tried the Dennis Smith Jr. experiment. His name was Derrick Rose. Smith Jr. plays the same style that Rose plays. I’m not saying that Smith Jr. will be the Derrick Rose before the injuries but they do play the same style of basketball. And guess what? It was a huge failure for the Knicks. the defense sucked, the ball movement sucked and especially late in games, there was no offensive motion, it was just isolation ball just trying to get to the rim and the Knicks lost so many games because of that.

The Knicks would’ve been the same old team, maybe a little better but not much.

Ntilikina gives the Knicks a new identity. He’s already showed glimpses of what the future is in store for us. And he can close out games with his defense and his clutch shots. Yeah, give me Ntilikina every day of the week.