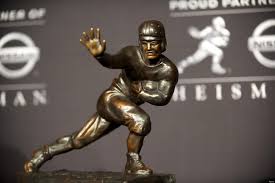 Barley has been red hot ever since last years loss in the Rose Bowl to USC. He stepped his game up to another level this past Saturday against one of the nations best defenses in Michigan. He torched Michigan’s defense with 108 yards on the ground on only 15 carries and 3 touchdowns. On the year, Barkley has 5 catches of 40 or more yards, while two other RBs in the hunt for Heisman (Love- Stanford, Jonathon Taylor- WISC.) have combined for 5 catches all year. Barkley’s next game is against conference rival Ohio State. If Barkley has another big game this weekend, you should put all your bets on him winning the Heisman.

Topping Bryce Loves Heisman resume is his crazy 10.3 yards per carry. Love is having a pretty solid year but he is getting out shadowed by Barkley. A big week for Love is coming up as Stanford plays Oregon State, who have a terrible run defense. If Love wants to stay in the race he has to light up Oregon States weak defense. Stanford and Love only have 3 big games remaining (Washington, Washington St, Notre Dame) so his chances of winning aren’t as great as Saquon’s unless Love absolutely kills the second half of the year.

Finishing off the top 3 candidates is QB Baker Mayfield. Mayfield has been carrying Oklahoma throughout the season. Baker had a monster game this past week as he completed 32 of 41 with 2 TDs and 410 yards against Kansas State. Mayfield is one of the nations top and smartest quarterbacks in the nations posting a 19-2 touchdown- interception ratio. Mayfield is going to have a great season, but most likely going to finish second in Heisman voting.

For more on the Heisman Race and other news in NCAA Football, be sure to follow @wingspansports.