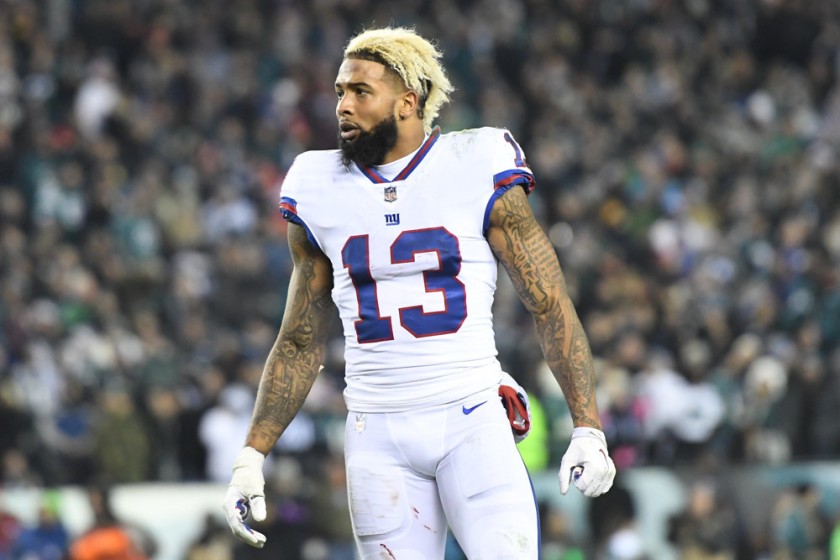 Listen, I get it. I understand why Giants are infuriated and frustrated. The team is 0-4, nothing is bouncing our way, injuries are piling up and the team needs some major improvement. In no way shape or form am I negating the article that was just published on Odell, saying that he should be traded.   That is our Presidnet’s thoughts on Odell and he makes some really solid points. The article is phenomenal and it makes sense for the Giants and the fans.

But let me just say this, the 3 people who started Wingspan, we all come from the same rooting interest. We root for the Mets, Giants, Knicks, Rangers and Notre Dame. Obviously, we have other writers writing about other teams, and other content. You all know that. But the 3 of us, since we root for the same teams, sometimes have different opinions.

This is my different opinion.

Odell Beckham Jr is the most talented wide receiver the Giants have ever had in their history. Not the best, YET, but definitely the most talents. The catches he makes, the way he impacts the game, and the stats he puts up are off the charts. I have never seen a receiver change a game the way Odell does.

Does he have some problems? Sure. He’ll throw some fits on the sideline, he’ll drop a ball here and there and that’s really about it. The celebrations he does that gives 15 yard penalties?! Please, he doesn’t do anything more than any other player does. Refs will just throw the flag because Odell is an easy target. But no one will blame Antonio Brown for throwing a water cooler and hitting his coaches hand away from him, right? No, because Antonio Brown can do no wrong. When Terrell Owens, Chad Johnson and Randy Moss were acting like jackasses that was all fun and games, right? People loved the 3 of them. But God Forbid Odell sneezes the wrong way he gets ridiculed. It’s insane.

Listen, Odell wants to win. He doesn’t care about anything else. If he really cared about himself and only himself he wouldn’t be playing right now. The guy is getting banged up left and right and still going out there every Sunday giving 100%. If he cared about himself he would be sitting on the sidelines and holding out until the Giants offered him a new contract. Or he would’ve skipped mandatory OTA’s. Or he would request a trade. But Odell has done neither of those things. Odell’s teammates have no problem with him, in fact they have his back and speak highly of him every chance they get. The only people that care about Odell’s actions is the Media, and it’s ridiculous. Like I previously wrote, no one will say anything about Antonio Brown’s fits, or Ezekiel Elliot’s multiple crimes he committed. Why? I don’t really know. It probably has to do with the fact that Odell plays in New York and he’s a star.

Those stats are ridiculously good and off the charts. You can’t find those numbers anywhere else.

The Ravens game Odell went for 8 catches, 222 yards, 2 TD’s and most of those yards came in the second half, after he returned from injury in the first half. And to win that game for the Giants he did this.

That was to stop a 3 game losing streak. A game the Giants desperately needed to win and was about to lose until Odell stepped up t the plate.

Next, is that Dallas game. The Giants offense was doing nothing all game. They couldn’t get the ball moving and if they lost the game they would fall to 8-5 instead of 9-4. At the time an 8-5 record was not good enough to get to the playoffs. The competition for the Wild Card was tight and if the Giants lost they would’ve had to win out to reach the playoffs (they didn’t win out and could’ve missed the playoffs). So with the Giants down 7-3, Odell comes up clutch yet again and does something no other player can do.

How he outruns all of those defenders still blows my mind. He out runs all of them and they all have 3+ yards on him. That’s just beast mode right there.

Now, let’s get to that Panthers game against Josh Norman. Yes, Odell was at fault that game, what he did was wrong and idiotic. He shouldn’t of let Norman get in his head. But you know what? I was there. I saw the dirtbag Panthers come out on the field with a baseball bat swinging in Odell’s direction. Is aw Norman throw the first punch and pus. I was glad to see OBJ defend himself. Now, he shouldn’t of lead with his head to Norman and Odell was wrong for that. But the Giants losing that game was not his fault. They were down 35-7 with about 20 minutes left in the game. The Giants came back to get the game within 7 and then on the drive to tie the game Odell went off. One catch after another and then when the Giants had the ball on the Panthers 15, 4th & 5, potentially the last play of the game, Odell comes up big again.

Everyone on God’s green Earth knew where Eli Manning was throwing that ball. The Panthers could’ve put all 11 guys on Odell and the ball was still going to him. So why couldn’t the best cornerback in the league at the time defend Odell on that route? Because Odell Beckham Jr is the best receiver in the NFL and is completely unguardable. Yes, the Panthers kicked a field goal to win that game but that’s not Odell’s fault, he doesn’t play defense.

Finally, for all the people out there who say Odell’s career stinks because of that playoff game, you’re an idiot. It was ONE GAME. If we base things off one game, or one season for that matter, David Tyree is the best receiver in the NFL, Peyton Manning never plays a football game again after that BRUTAL rookie season. It’s just one game. Look at Antonio Brown’s and Julio Jones first playoff game, they weren’t any good either.